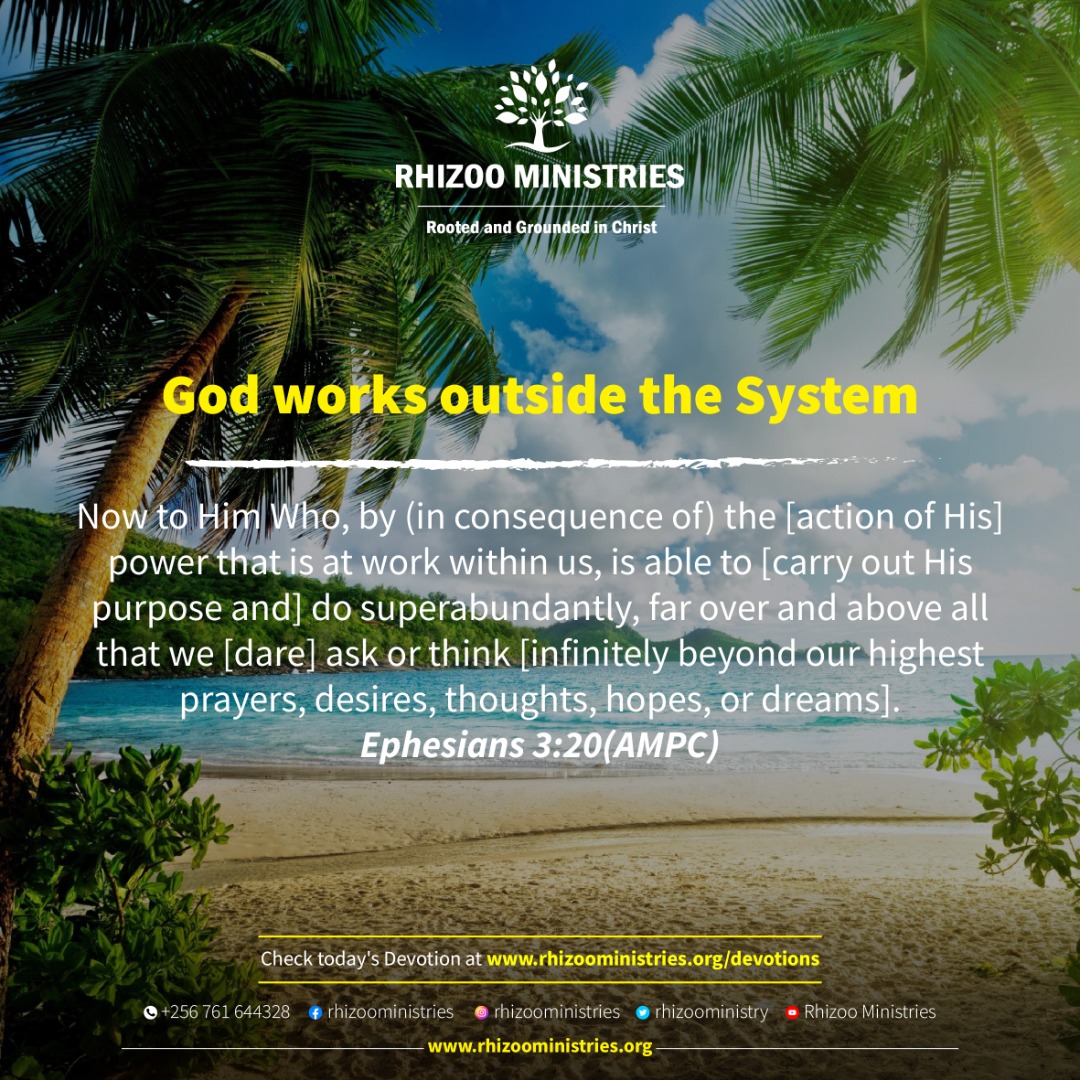 God works outside the System

Now to Him Who, by (in consequence of) the [action of His] power that is at work within us, is able to [carry out His purpose and] do superabundantly, far over and above all that we [dare] ask or think [infinitely beyond our highest prayers, desires, thoughts, hopes, or dreams]. Ephesians 3:20(AMPC)

It is such a great comfort and assurance knowing that no matter how seemingly insurmountable a crisis may look our God is far greater who will always get us through and over it all triumphantly.

He’s far above and beyond any challenge, trouble or problem. Though He created time and does operate in time He’s not governed or limited by it because He exists in eternity outside of time.

He can speed up time like when He turned water into wine John 2:1-11, or slow it down like when Joshua was in battle and he spoke to the sun to stand still and it did so in the middle of the sky for a whole day. Joshua 10:12-14.

So do not worry if time seems not to run in your favor. It could be taking too slow and too long to happen or is something happening too soon and too fast. The God who’s inside and outside of time will cause everything to turn out in your favor.

Though He created space and does operate in it, He’s not governed or limited by it. He’s everywhere at once. He’s in heaven and on earth at the same time. Jeremiah 23:23-24(NKJV) Am I a God at hand, says the Lord, and not a God afar off? Can anyone hide himself in secret places so that I cannot see him? says the Lord. Do not I fill heaven and earth? says the Lord.

He calls the things which be not as though they are. When conventional wisdom says it’s over it’s the end, God says it’s not yet over, it’s just starting. This is what He told Abraham and Sarah in their old age with Sarah moreover barren. That they’ll have a son. Abraham did not consider his own body, already dead (since he was about a hundred years old), and the deadness of Sarah’s womb-see Romans 4:19.

He instead considered the God who works outside that system. He was fully convinced that what God had promised He was also able to perform- see Romans 4:21.

Choose to look to the God who works outside what you know in your mind, what seems humanly possible, what science, culture and religion says to be possible.