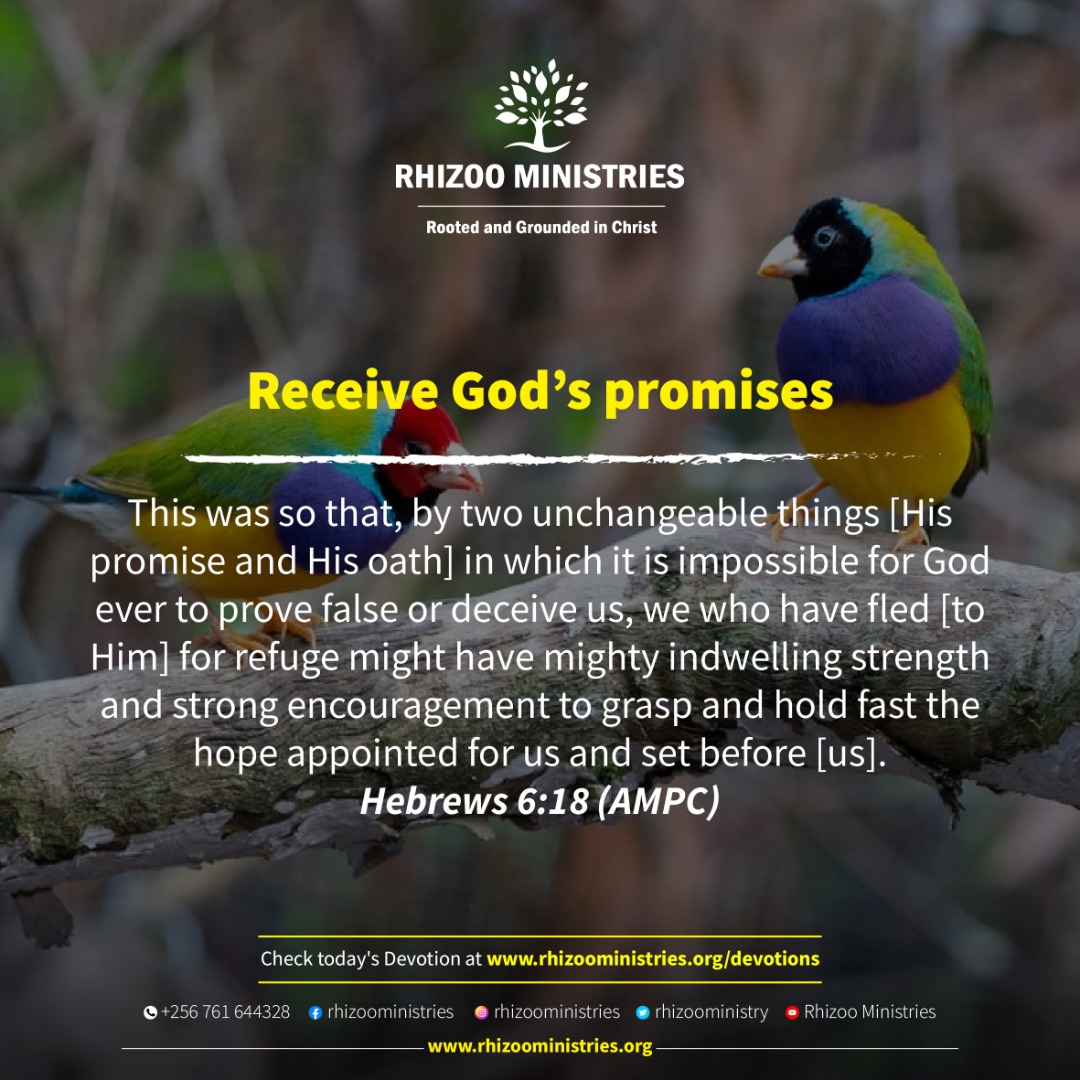 This was so that, by two unchangeable things [His promise and His oath] in which it is impossible for God ever to prove false or deceive us, we who have fled [to Him] for refuge might have mighty indwelling strength and strong encouragement to grasp and hold fast the hope appointed for us and set before [us]. Hebrews 6:18 (AMPC)

For every purpose and plan of God there’s first a promise. God’s power, His provision is always preceded by a promise.

This is so because the promise is God’s Word and with God everything begins with, is sustained by and brought to fulfilment by His Word. God does everything by and through His Word. John 1:1-3.

In all His dealings and workings with us God gives us His promises so that we who have fled to Him for refuge might have mighty indwelling strength and strong encouragement to grasp and hold fast the hope appointed for and set before us. Hebrews 6:18 (AMPC)

In the making of Abraham, the blessed father of a multitude of people, a great nation, God first gave him promises. God told him “I will bless you and make you a blessing. Genesis 12:1-3.

Thousands of years before Jesus came to earth to save us, God first gave promises of His coming, life and mission. We see that right after the fall of man in the garden God gave the promise that the serpent would bruise the Seed of the woman and the Seed of the woman would bruise or crush the head of the serpent. This was the promise of the Redeemer Messiah Jesus Christ who would be born of a virgin woman. He would be beaten, crucified, and die but He would rise from the dead having conquered and destroyed the devil who’s the serpent.

God gives us His promises for us to hold onto as we wait for the full manifestation of what He has said. The promises build faith and patience in us, give us assurance, keep us focused, and strengthen us in the face of and against any contradiction and opposition.

Abraham and Sarah were able to have a child when they were almost a hundred years old and ninety years old respectively with Sarah’s womb being barren because God gave them a promise that they would have a child. Abraham held onto that promise, stood strong against all-natural physical contradictory evidence until what God promised came to pass. Romans 4:17-21.

Receive the promises of God today. If you’re sick or have any health-related issues lay hold of the promise of healing and health. He says by his stripes we were healed – 1Peter 2:24.

Perhaps there’s an emptiness in you, you’re searching for the meaning of life. Take hold of the promise of eternal life which is the complete, fulfilled life of God by believing on and confessing Jesus is Lord and He rose from the dead. Romans 10:9, 10.

We receive and walk in the promises of God by faith.

By faith these people overthrew kingdoms, ruled with justice, and received what God had promised them. They shut the mouths of lions. Hebrews 11:33 (NLT)

This means hearing the Word, speaking the Word and acting in a way that rightly corresponds to the Word.