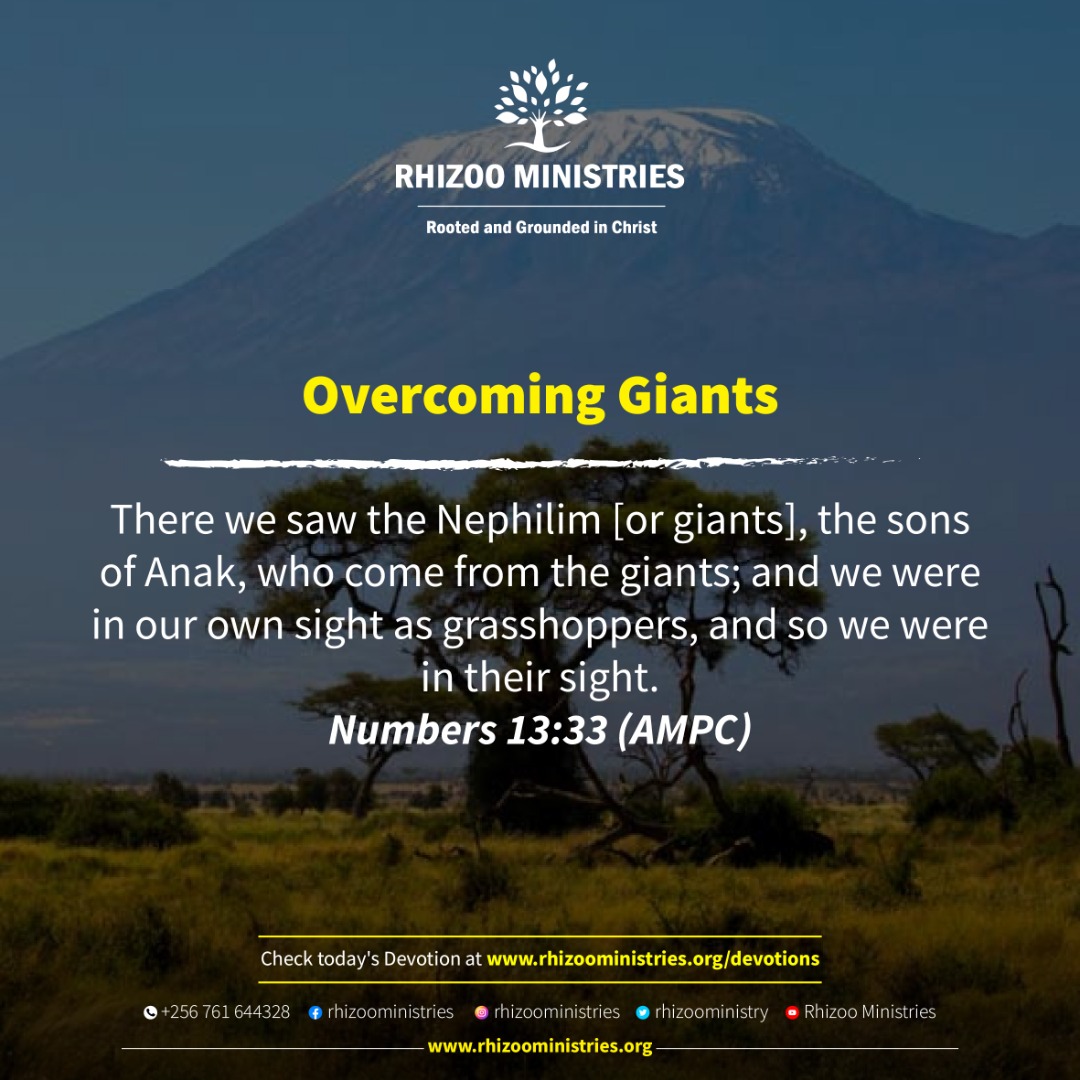 There we saw the Nephilim [or giants], the sons of Anak, who come from the giants; and we were in our own sight as grasshoppers, and so we were in their sight. Numbers 13:33 (AMPC)

When God told Israel about Canaan the promised land flowing with milk and honey into which He was bringing them, though He made mention of enemy inhabitants dwelling in that land, He never once used the term “giants” because to Him they were not giants but an already disarmed, helpless, defeated enemy. Actually He told Israel that He had already subdued the inhabitants of Canaan under Israel.

Fast forward millennia of years to today and it’s the same story repeated over and over.

The Church today is also seeing and talking about giants!

The Triumphant Church of Jesus Christ, seated with Him in the heavenly places at Father God’s Righteous Right hand of all authority and power far above all principality, rule might and dominion is seeing and talking about giants!

We of whom the Word of God says we have overcome the enemies that are in the world because of the Greater One in us (1John 4:4) are still seeing, talking about, fighting, praying and fasting against, trying to overcome giants!

God doesn’t see giants because there aren’t any before Him! Jeremiah 32:27 (AMPC) Behold, I am the Lord, the God of all flesh; is there anything too hard for Me? Is there a giant for the Lord? Absolutely none! You may reason “that’s the Lord and not us, we are only mere human beings” We are not mere human beings. The Greater One, the One for whom nothing is difficult dwells in us, is with us and for us.

We only see giants in our own mind when we take our attention off of the Greater One on the inside of us and look at other contradictory situations, conditions, or people.

In our Scripture account at the start there were two people who never saw giants. The very same enemy that the other Israelites saw as giants, Caleb and Joshua saw as bread for them! Hear what these men of faith said:

Only do not rebel against the Lord, neither fear the people of the land, for they are bread for us. Their defense and the shadow [of protection] is removed from over them, but the Lord is with us. Fear them not. Numbers 14:9 (AMPC)

God testified that Caleb had a different spirit. Numbers 14:24. These two men chose to see what God saw and they were thus the only ones of all the adults that left Egypt who entered, inherited and possessed the Promised Land. The rest of the adults who only saw giants perished in the wilderness of unbelief. Only their children made it with Caleb and Joshua.

The only giants to overcome are the self-made ones. They are collectively all the wrong ungodly mindset that says there are things, situations, demons, powers, conditions, diseases, problems too hard for you.

Little children, you are of God [you belong to Him] and have [already] defeated and overcome them [the agents of the antichrist], because He Who lives in you is greater (mightier) than he who is in the world. 1 John 4:4 (AMPC)