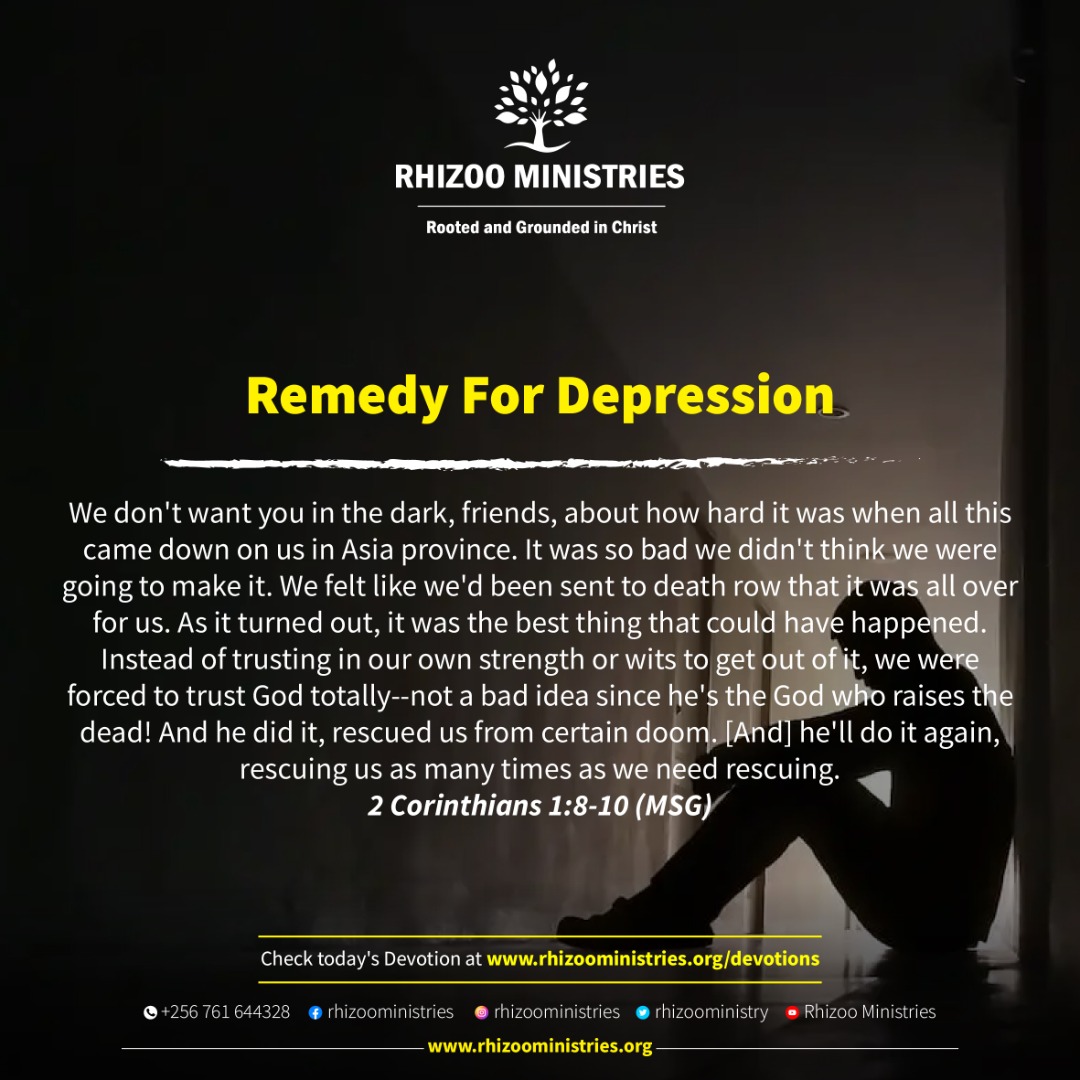 We don’t want you in the dark, friends, about how hard it was when all this came down on us in Asia province. It was so bad we didn’t think we were going to make it. We felt like we’d been sent to death row that it was all over for us. As it turned out, it was the best thing that could have happened. Instead of trusting in our own strength or wits to get out of it, we were forced to trust God totally–not a bad idea since he’s the God who raises the dead! And he did it, rescued us from certain doom. [And] he’ll do it again, rescuing us as many times as we need rescuing. 2 Corinthians 1:8-10 (MSG)

The remedy for depression and every other trouble in life is eyes off the problem, eyes off yourself, eyes off other people, and eyes totally onto God the one who raises the dead and rescues.

In this passage of Scripture the Apostle Paul narrates his encounter with depression.

This is the greatest of the apostles because by God’s Grace he worked harder than the rest. He received more revelations and visions of the Lord most especially the Gospel of Grace. He wrote three quarters of the New Testament. But at one time he bumped into depression.

He says it was hard for him and his companions when everything around them came down on them while in Asia. That’s what depression is like – everything coming down on you.

Some kind of affliction and oppressing distress befell Paul and his ministry team while in Asia. It was so overwhelming that even these mighty, seasoned, trial hardened, battle tested, generals of the faith were so utterly and unbearably weighed down and crushed that they despaired even of life itself – in other words they wanted to die! 2 Corinthians 1:8 (AMPC). Now that right there is depression one on one.

They felt within themselves that they had received the very sentence of death – now here they felt like they were dead already!  2 Corinthians 1:9 (AMPC). That’s the peak of depression.

But thank God Paul and his companions got out and over depression.

Paul even gleefully says that it (that distress and depression they experienced) was the best thing that could have happened! Why? Well instead of trusting in their own strength or wits to get out of it, they were forced to trust God totally and it wasn’t a bad idea since He’s the God who raises the dead! And He did it, He rescued them from certain doom. [And] he’ll do it again, rescuing us as many times as we need rescuing. 1Corinthians 1:9, 10 (MSG)

The remedy for depression or any other suffering and pain is switching from trust in our own strength and wits to trust in the God who raises the dead and rescues us as many times as we need rescuing!