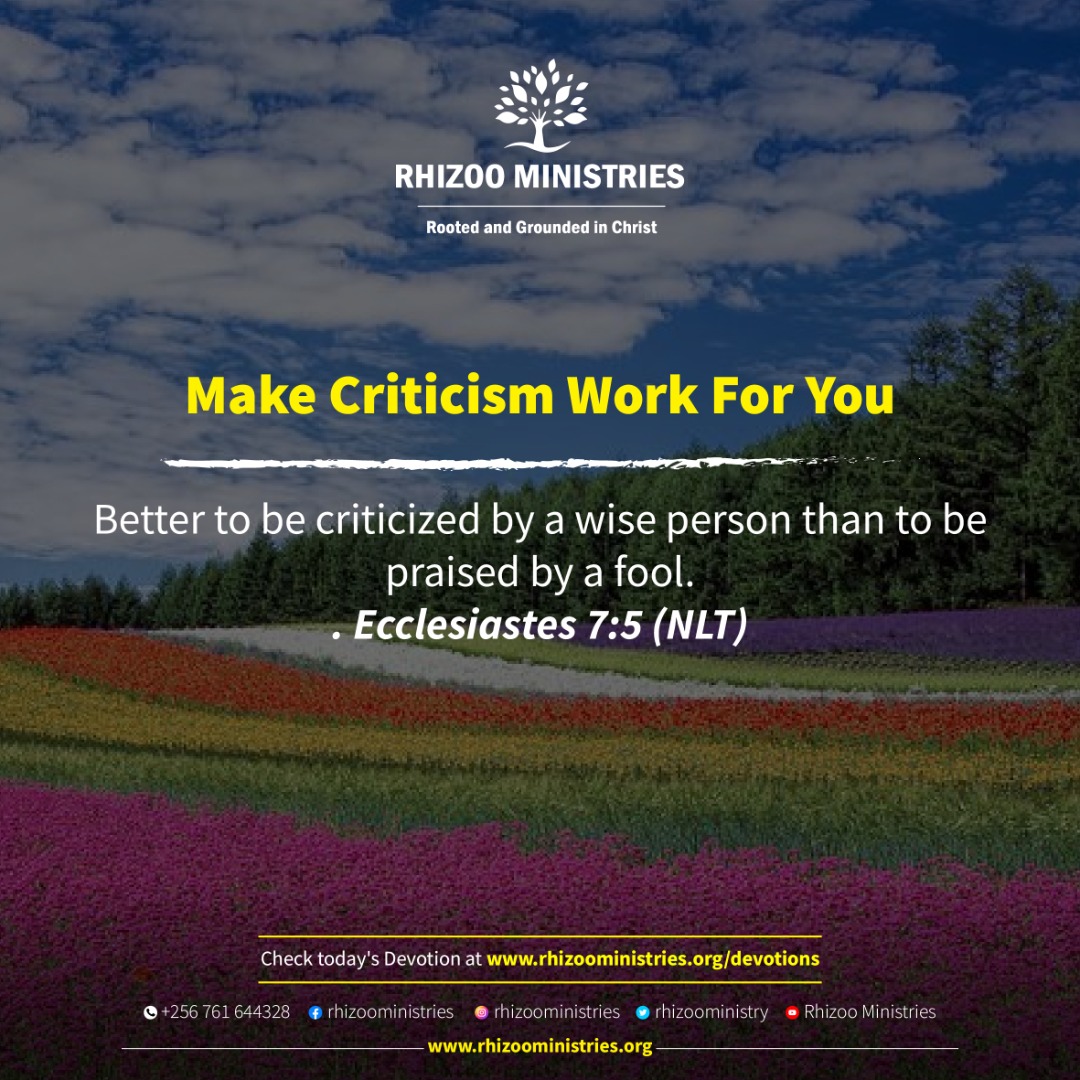 Make Criticism Work For You

Better to be criticized by a wise person than to be praised by a fool. Ecclesiastes 7:5 (NLT)

No one has escaped criticism and it’s as old as the fall of man in the garden where for their sin Eve blamed the snake, then Adam blamed Eve and God who gave her to him.

Matter of fact ever since then no one has been as criticized as God Himself yet He has always lived above it all. He has been criticized for all the wrongs in the earth. Even today every disaster including plagues, earthquakes, floods, droughts and famines are termed by man as acts of God. In all the cultures of the world including the Jews who have known the one true living God everyone is convinced in their mind that God is the author of death. Yet that’s not true. He is life, the author, giver and sustainer of life.

Jesus and His sacrifice of death on the Cross is the proof of God’s opinion of man that He so values us, we are His pearl of great price, He sold all He had to purchase or redeem us.

Therefore we should look at and judge every criticism or analysis or assessment of us by others in the light of God’s own evaluation of us.

When anyone points out your faults in order to attack, put down or destroy your person, counter that by reminding yourself of your true standing as the upright and accepted one before the true righteous Judge and valuer Father God.

Look at His estimation of you in His sight revealed in His Word – Romans 8:33-34 (AMPC) Who shall bring any charge against God’s elect [when it is] God Who justifies [that is, Who puts us in right relation to Himself? Who shall come forward and accuse or impeach those whom God has chosen? Will God, Who acquits us?] Who is there to condemn [us]? Will Christ Jesus (the Messiah), Who died, or rather Who was raised from the dead, Who is at the right hand of God actually pleading as He intercedes for us?

Then also we should understand that not all criticism is meant to put us down or undo us. When we are positively criticized as a way of setting us right that’s for our wellbeing. This is the criticism of the wise person referred to in our theme Scripture. We should humbly appreciate, receive and use it for our improvement, growth and advancement.

Proverbs 13:18 (NLT) If you ignore criticism, you will end in poverty and disgrace; if you accept correction, you will be honored.

According to this Scripture there’s a good and healthy criticism that’s for the purpose of correction resulting in honor.

This kind of criticism that’s not just finding fault but rather for the purpose or filtering out the faults and correcting them is godly and is meant for our up building. We shouldn’t ignore it but rather embrace and use it to our advantage.