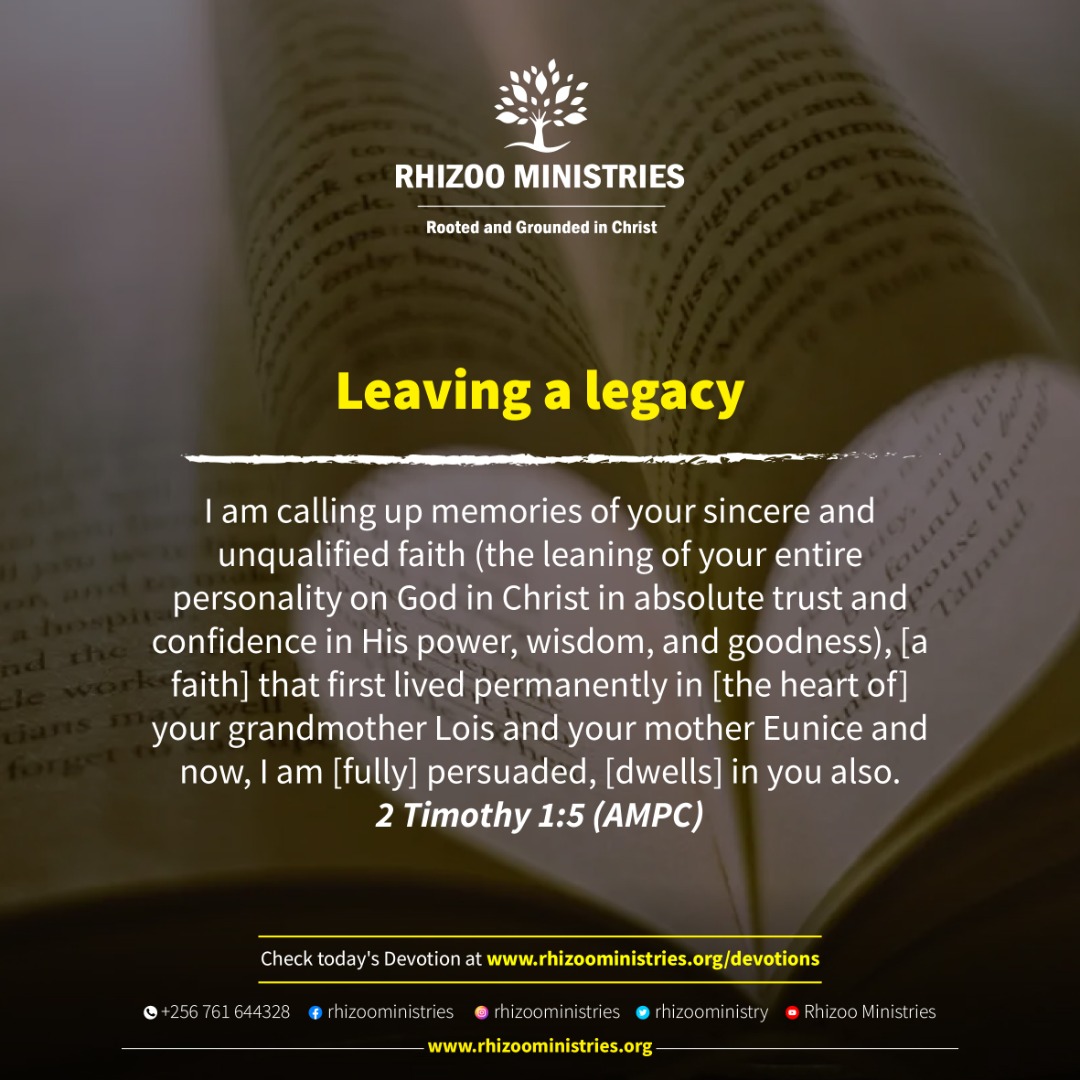 I am calling up memories of your sincere and unqualified faith (the leaning of your entire personality on God in Christ in absolute trust and confidence in His power, wisdom, and goodness), [a faith] that first lived permanently in [the heart of] your grandmother Lois and your mother Eunice and now, I am [fully] persuaded, [dwells] in you also. 2 Timothy 1:5 (AMPC)

Everyone, everything leaves a legacy – something they transmit or pass on to those who come after them. A legacy can be either good or bad.

In our text scripture Paul in talking to Timothy tells him that he’s walking in the legacy of Faith that his grandmother Lois passed on to his mother Eunice then eventually to Timothy.

What we live for and how we live matters a lot not just for us and in our times but it also greatly affects the generations that come after us.

Lois was a woman of faith. That means she was a righteous or godly woman because the righteous live by faith. Galatians 3:11. Her faith and righteous life did not stop with her. She passed it to her children. Eunice was her daughter; she caught and lived that faith life which she also passed onto Timothy.

We have been called to live by Faith not only for our benefit but also for the sake of our children and their children after them. The greatest, most indispensable that which cannot be taken away legacy we can pass onto our children or those that come after us is Faith or trust in God.

Let’s look at another example of a person leaving a legacy.

In Genesis 25:5, Abraham left all his possessions to his son Isaac. In Genesis 26:1, 2 there was a famine in the land and God told Isaac not to go to Egypt but stay in the land and He will be with him and bless him. Isaac stayed and sowed in that land which God told him and reaped in the same year a hundredfold; and the Lord blessed him. He began to prosper, and continued prospering until he became very prosperous; for he had possessions of flocks and possessions of herds and a great number of servants. So the Philistines envied him. Genesis 26:12-14

In this account Abraham left material wealth or possessions to his son Isaac. But on close examination he left something far greater and more powerful. It was faith in God. Because there was a famine which could have depleted or wiped out all the material possessions Abraham left to Isaac. This Faith in God that Abraham passed onto Isaac implies a relationship and fellowship with God. Isaac heard from and trusted in God who told him not to go to Egypt but rather dwell in the land in the midst of a famine. He went on to sow and in that same year got a hundred percent harvest.

Let us educate our children or those God has brought into our care, let’s pass onto them material and intellectual possessions but much more than all of that let’s pass on them faith in God – a relationship and fellowship with God the only thing that can never be taken away.