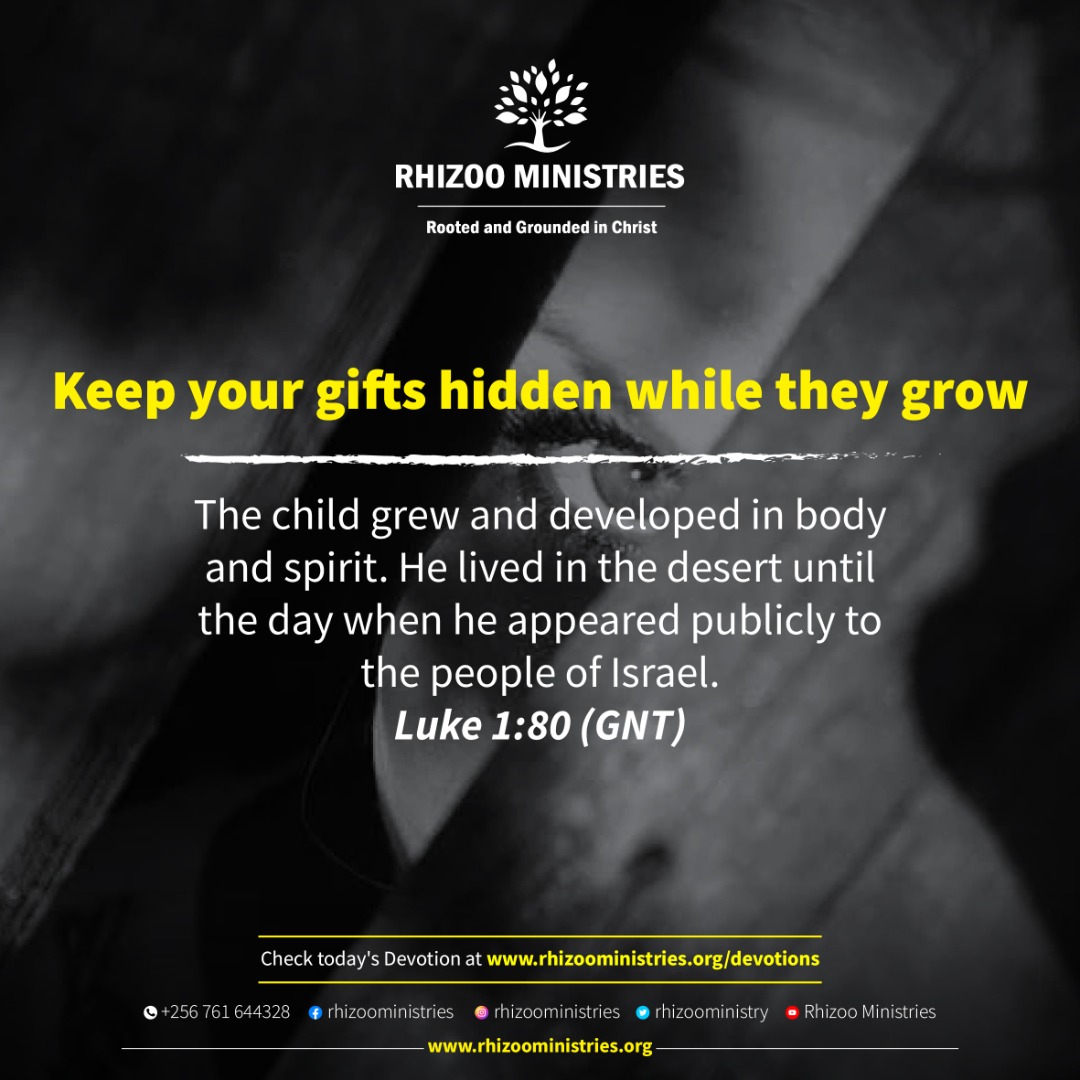 Keep your gifts hidden while they grow

The child grew and developed in body and spirit. He lived in the desert until the day when he appeared publicly to the people of Israel. Luke 1:80 (GNT)

This child is none other than John the Baptist of whom our Lord Jesus said he’s the greatest of the prophets of the Old Testament.

His birth was supernatural, foretold by an angel. It was miraculous because the parents had been too old to give birth, and he was filled with the Holy Spirit while in his mother’s womb. But this divinely gifted and empowered from the womb preparer of the way of the Lord had to wait some good time while his gifts grew before he could start his public ministry.

On the contrary in the Old Testament another great prophet and deliverer – Moses jumped up into action too fast too soon before God’s time and he ended up running for dear life plus he had to wait another forty years before he could use his God assigned gifts- Exodus 2:11-15

One famous sculptor started work on two art pieces at the same time. One of the pieces of sculpture was outside where people were passing all the time and the second one was hidden away from the public and only the sculptor had access to it.

He only perfectly finished the sculpture that was hidden. The piece that was in the public place never got finished. As the sculptor would be doing his work the uninvited opinion from passersby would come in like “the nose is too rounded, no it’s too narrow, oh it’s bent too much to the left!” On and on went the comments concerning even the rest of the parts of the sculpture! So, he spent time making changes in response to the various opinions he paid attention to.

This is the very same exact thing that happens to us when we expose the process of growth of our gifts, callings, talents to public scrutiny and censorship.

When a rabbit has just been born it looks exactly like a rat! So those who know nothing about rabbits and only go by what they physically see would fight tooth and nail to convince a baby rabbit that it’s a rat!

When you’re just starting out in your gift you may seem off, the exact opposite of you!

Those who see you will convince you that you are not it, you don’t have what it takes, and you’re unqualified!

It is wisdom to keep our gifts hidden while they are growing. This doesn’t mean we entirely hide ourselves and what God is doing in us away from everyone one but rather we be careful to keep away from vision killers. Those who would discourage us, derail us or even attempt to destroy the potential in us.

One effective way of hiding your gift while it’s growing is exercising privately. For instance, if you’re a singer before looking for stadium size shows start with singing to the Lord, to yourself, then those around you who believe the best of you. Take this example from David in 1 Samuel 17:33-37(MSG) Saul answered David, “You can’t go and fight this, Philistine. You’re too young and inexperienced–and he’s been at this fighting business since before you were born.” David said, “I’ve been a shepherd, tending sheep for my father. Whenever a lion or bear came and took a lamb from the flock, I’d go after it, knock it down, and rescue the lamb. If it turned on me, I’d grab it by the throat, wring its neck, and kill it. Lion or bear, it made no difference–I killed it. And I’ll do the same to this Philistine pig who is taunting the troops of God-Alive. GOD, who delivered me from the teeth of the lion and the claws of the bear, will deliver me from this Philistine.”