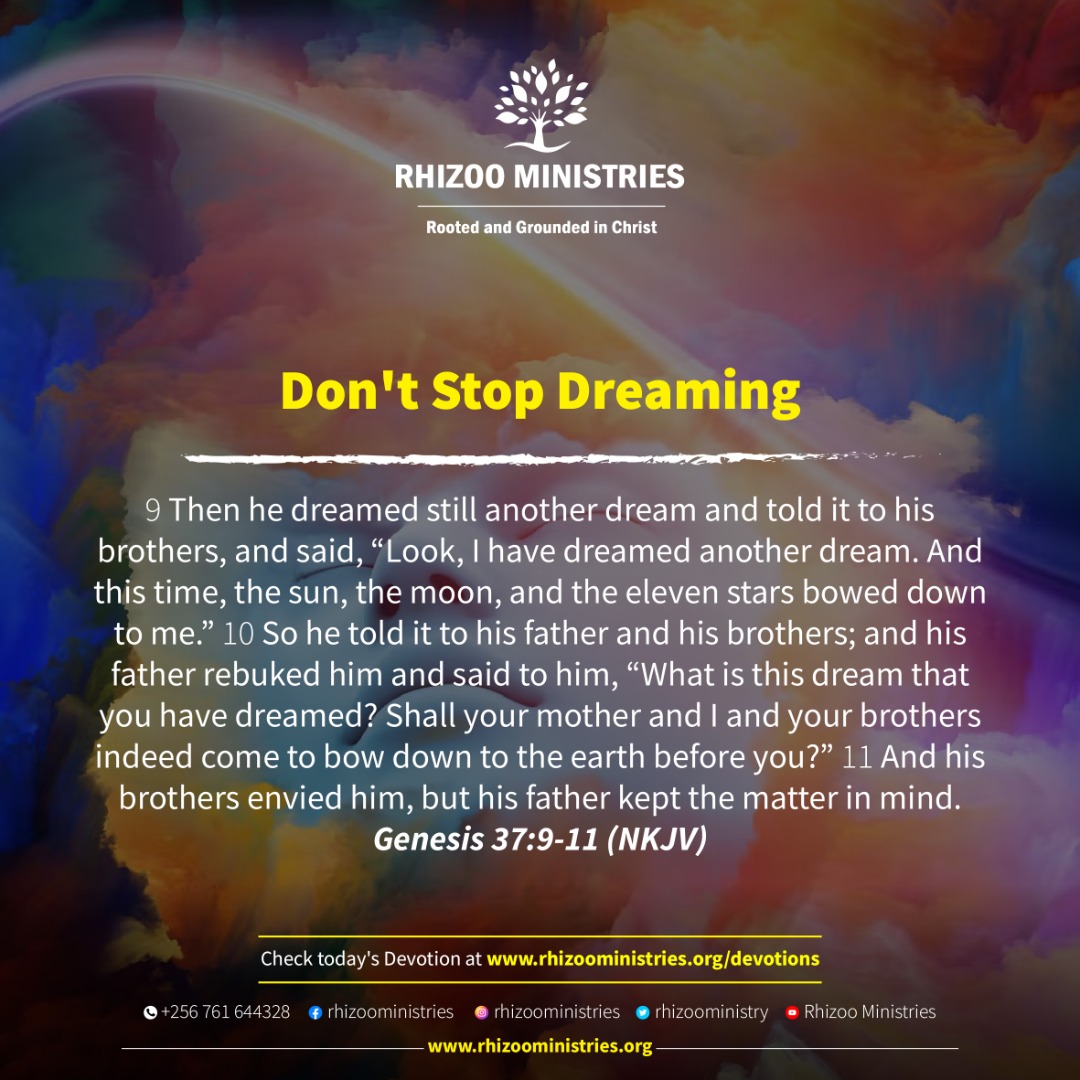 9 Then he dreamed still another dream and told it to his brothers, and said, “Look, I have dreamed another dream. And this time, the sun, the moon, and the eleven stars bowed down to me.” 10 So he told it to his father and his brothers; and his father rebuked him and said to him, “What is this dream that you have dreamed? Shall your mother and I and your brothers indeed come to bow down to the earth before you?” 11 And his brothers envied him, but his father kept the matter in mind. Genesis 37:9-11 (NKJV)

Joseph’s story is one of the most remarkable real life success stories in the history of man recorded in the Bible. He was Jacob’s second last born of twelve brothers and one sister. Joseph was among his own siblings least likely to become much in life. Even his father who though loved him only showered him with favoritism much to the other brothers’ envy. But Joseph had a dream! He saw something that had not yet happened in the natural as already in action.

That’s what having a dream or dreaming means. He saw something that wasn’t even possible from a natural circumstantial point of view. He was shown by God and therefore saw himself as a leader. One way God speaks to us is through dreams-Job 33:14-17

There’s the kind of dreaming that happens when we are asleep and it’s true that Joseph actually dreamt while he was sleeping but what we are focusing on here is the aspect of seeing something before it has actually happened physically.

His brothers out of envy sold him to slavery, he ended up in Egypt where later he was thrown into prison after being falsely accused but he never stopped dreaming because from the prison he finally pulled up in Pharaoh’s palace as prime minister of the most powerful nation on earth then- Genesis 37:12-36; 39-41.

Do you have a dream? Not necessarily things you saw or heard at night when you were sleeping though even in that manner, we do sometimes get godly instructions.

We are talking about the inward desires, visions, or pursuits of becoming someone and something significant, profitable and influential in life.

Are you dreaming of finishing your studies, advancing in your career or vocation, starting your own business or company, is it marriage, having and raising children or a ministry?

Like Joseph you may seem the least likely to be or do it but don’t stop dreaming because with God dreams come true. For Joseph, it took him 13 years to reach the palace; Genesis 41:46(AMPC) Joseph [who had been in Egypt thirteen years] was thirty years old when he stood before Pharaoh king of Egypt. Joseph went out from the presence of Pharaoh and went [about his duties] through all the land of Egypt. As you dream there will be a silent period/ silent years as if nothing is changing, this is when you dig in and believe the God of possibilities, for with God all things are possible.