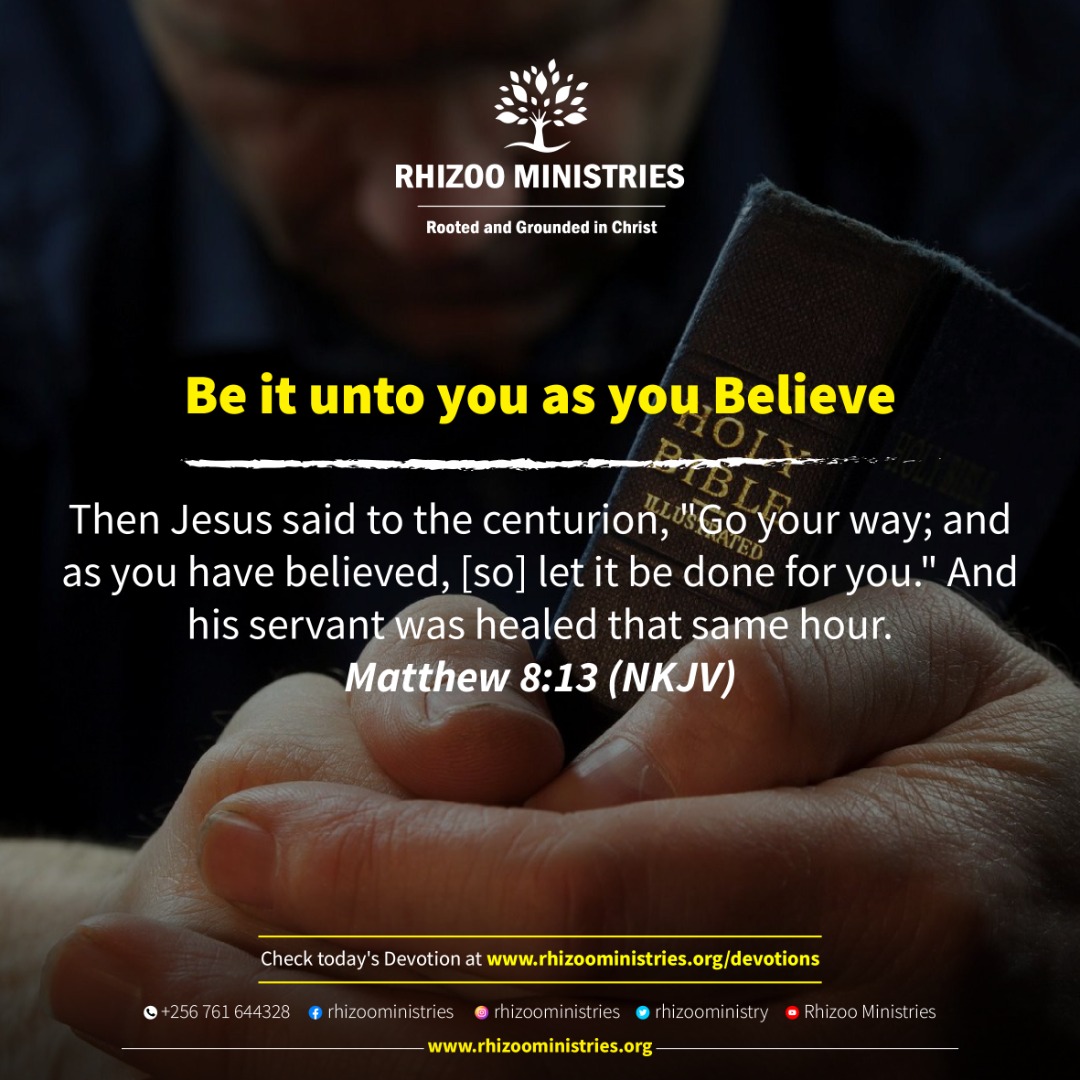 Be it unto you as you Believe

Then Jesus said to the centurion, “Go your way; and as you have believed, [so] let it be done for you.” And his servant was healed that same hour. Matthew 8:13 (NKJV)

According to Jesus, life is not about what happened to us or what we wish happened but about what we believe. The just shall live by faith. This is God’s prescription for living.

We live, we advance in life, we grow and progress in any given area of life believing.

Whatever you expect in life, believing it is what gives it manifestation. God believed in us long before we were formed in our mothers’ wombs, now here we are on the planet. When we hear and believe in a God who first believed in us, we see Him and His works manifest in our lives.

In our text scripture Jesus tells a Roman centurion that be it to you according as you have believed. That man came to Jesus seeking healing for his servant whom he had left at home very sick and in terrible pain. When Jesus replied that He was going there to heal the servant, the centurion told Him “Only speak the word and my servant will be healed” This was great faith according to Jesus. So, he told the Roman soldier “be to you as you have believed” and it was so because the servant got healed at that moment.

We express or release our believing by speaking. Whatever you’re believing you ought to say it in order to see it. This is a divine Principle that God Himself abides by and operates in. In the beginning when God was creating the world He operated in this law or principal. He spoke what He believed and then He saw it. He said let there be light and there was light. Then God saw the light that it was good. What God believed He said then He saw.

What do you believe? Say it and you will see it. Don’t believe what the world says that seeing is believing. That is if I see it with my physical eyes, touch it, smell it, hear it with my physical ears, taste it then I will believe it. Believe what the Word of God says that believing and speaking what you believe is seeing and having it. Believe you’re healed, delivered, provided for, strong, at peace, victorious, in Jesus’ Name, say it with your mouth and see it, experience it. According to what you believe be it unto you.