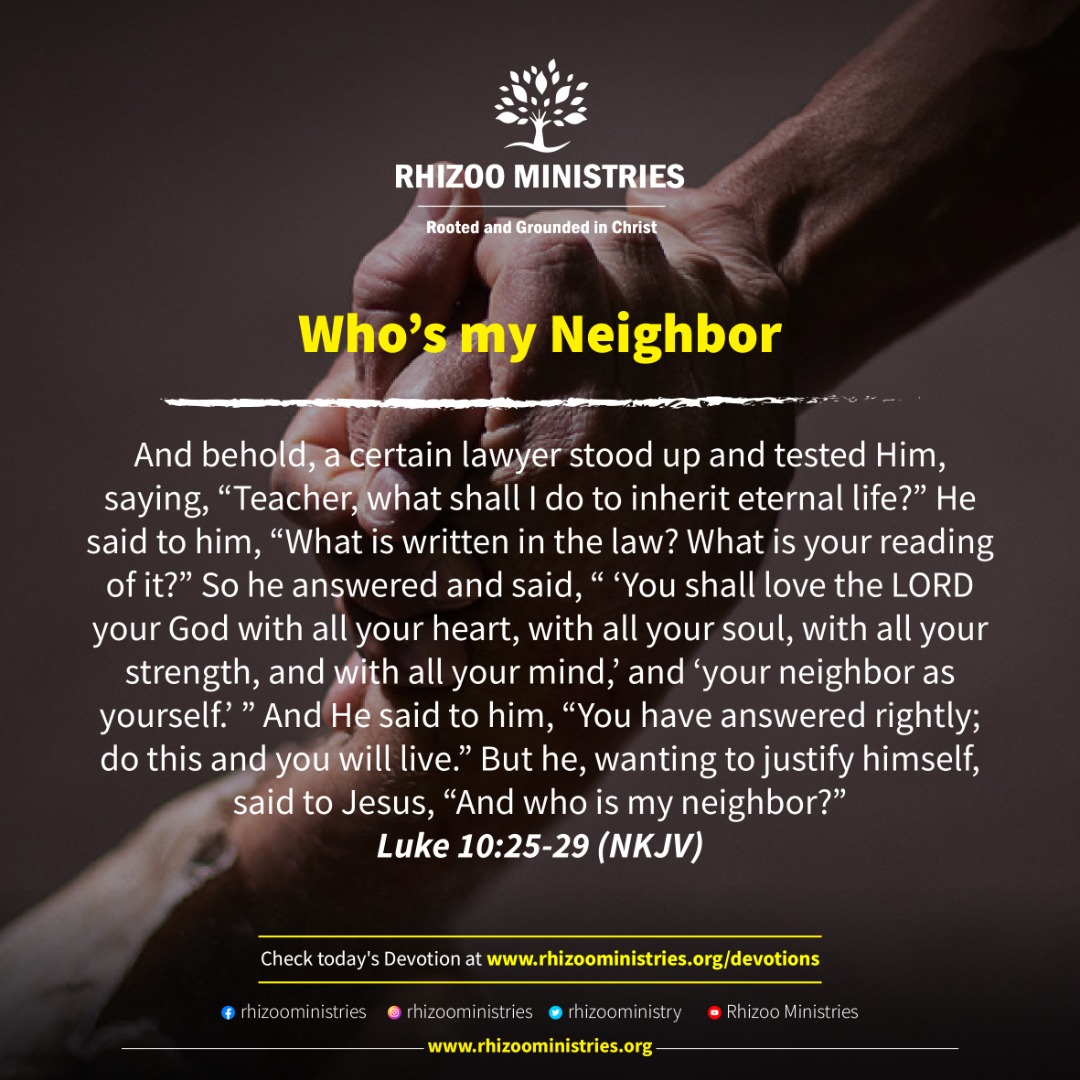 25 And behold, a certain lawyer stood up and tested Him, saying, “Teacher, what shall I do to inherit eternal life?” 26 He said to him, “What is written in the law? What is your reading of it?” 27 So he answered and said, “ ‘You shall love the Lord your God with all your heart, with all your soul, with all your strength, and with all your mind,’ and ‘your neighbor as yourself.’ ” 28 And He said to him, “You have answered rightly; do this and you will live.” 29 But he, wanting to justify himself, said to Jesus, “And who is my neighbor?” Luke 10:25-29 (NKJV)

According to Jesus and contrary to what people popularly assume our neighbor isn’t necessarily the person physically closest to us.

Your neighbor may not be the person next door or in the same neighborhood. Your neighbor isn’t necessarily the people in your social class, not those fitting within your cultural, religious, academic, financial circle.

In the story of the good Samaritan a man traveling was attacked by robbers who stripped him of everything he had. They then beat him terribly leaving him almost dead. A priest and a Levite – two religious leaders who are assumed to know and to be the strictest observers and keepers of God’s law passed by this man, saw him but walked on by on the other side. Then came a Samaritan down that same road. Now Samaritans were foreigners despised by the Jews who had no dealings with them.

When the Samaritan saw the man who was beaten, he had compassion on him, went to him, bandaged his wounds, pouring on oil and wine, put him on his donkey and took him where he could get further treatment taking care of the bill. This despised foreigner who had compassion, helped and shared what he had showed himself to be the true neighbor. Now just like the other two people who passed by, the Samaritan was going somewhere, so He didn’t help because it was convenient since he was idling around, no! We see further that when he had brought the wounded man to the inn, he commanded the inn keeper to take care of him until he returned from his journey. Helping the needy is sometimes not convenient but we do it because we love God.