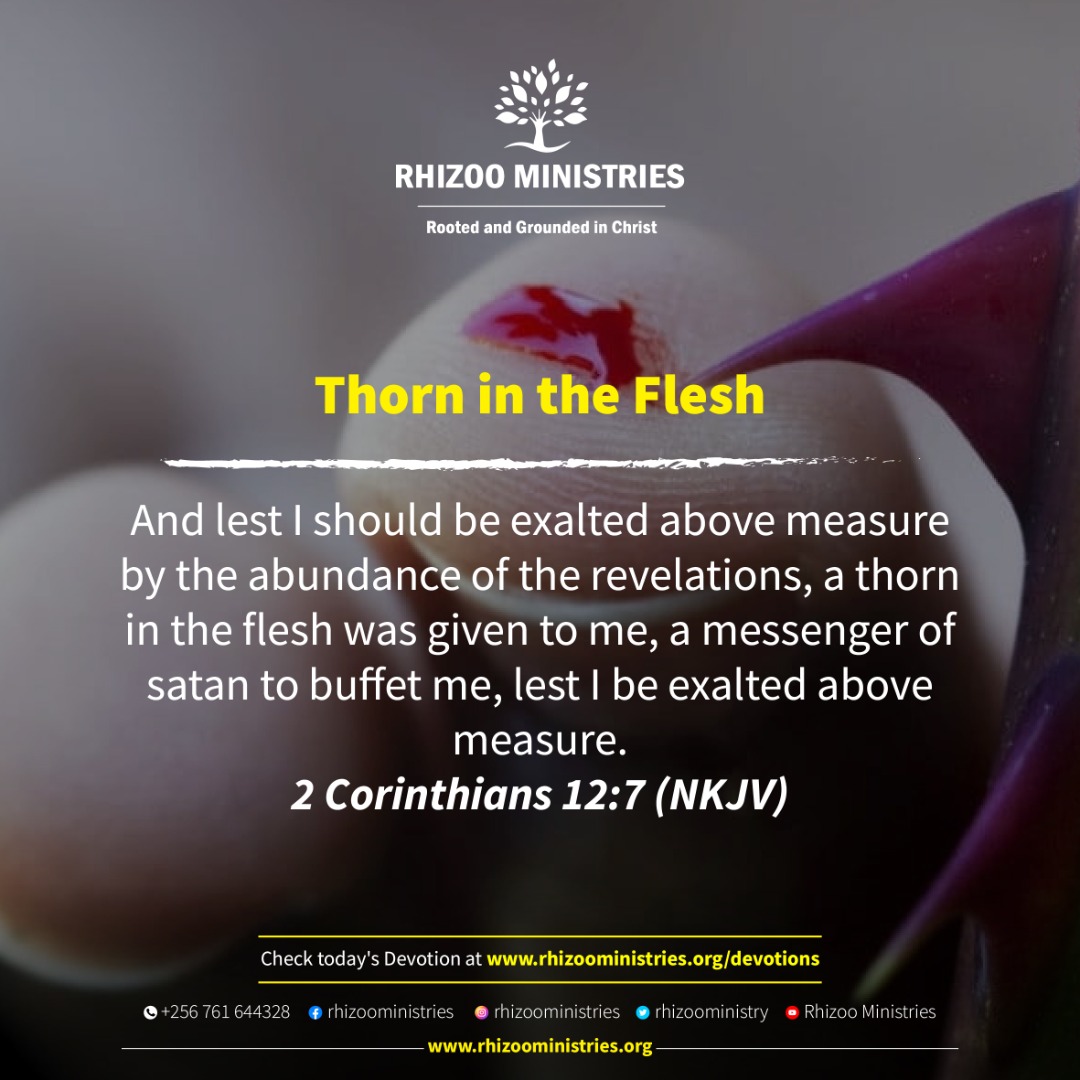 Thorn in the Flesh 

This Scripture has been erroneously, unscripturally used by many to back, boost and broadcast the blatant shameful lie of the enemy that sickness and various other kinds of suffering like accidents, destruction, death, etc, are used by God to discipline and humble us.

There’s also the wrong and twisted mindset that sometimes God doesn’t and won’t heal or deliver a person even when they pray to Him basing on this passage of Scripture.

Right from the beginning of this 12th chapter of 1 Corinthians Paul narrates to us of the visions and revelations of the Lord that he received.

Then he clearly tells us that in order that he shouldn’t get exalted beyond measure he got a thorn in the flesh, a messenger from satan to buffet or keep him under check.

Notice that this thorn in the flesh was not from God because Paul calls it a messenger from satan.

God had nothing to do with this thorn in the flesh. It was the work of satan. Someone might reason that God permitted it. No!  God has never permitted or sanctioned satan or any work of satan on earth. In the beginning God created heaven and earth and all the beautiful creation in them, and then He created man and gave him dominion, authority, and power over everything He had created. See- Genesis 1:26-28.

When man sinned in the garden by listening to satan’s lie he gave satan permission to get in and oppress God’s creation. Ever since then the devil is on earth and will attack anyone no matter who they’re including Jesus Himself whom He tempted in the wilderness but Jesus overcame him with the Word.

So Paul himself just like Jesus was tempted, or attacked by satan.

Now Paul says he went to the Lord and pleaded with Him three times that this temptation or attack or thorn in the flesh depart from him. see-2 Corinthians 12:8.

But the Lord answered Paul “My grace is sufficient for you, for My strength is made perfect in weakness.” 2 Corinthians 12:9.

This doesn’t mean that the Lord refused to remove this tormenting oppressive condition or situation that Paul was experiencing; neither does it mean that He told Paul to endure it by God’s Grace.

The Word is very clear: The Lord told Paul “My Grace is sufficient for you. What He meant was “Paul take advantage of my Grace, use my Grace to deal with and overcome that thorn”

Grace is all of God’s ability and sufficiency to reign in life that He has freely richly given to us in Christ- see Romans 5:17

There are certain things we take to the Lord in prayer and intercession and He tells us “My Grace is sufficient for you, take advantage of my Grace, deal with that”

For example Jesus told us to speak to the mountain and it shall move. He didn’t tell us to take the mountain to the Lord in prayer. Surely, certainly there are things we should take to the Lord in prayer – for instance we should cast our cares to the Lord. But nowhere in Scripture are we told to talk to God about satan or his works or messengers! We are explicitly and expressly told we have authority and power over him and his works and that we should resist and cast him out!

Take advantage of God’s Grace, resist and rebuke the devil behind the enmity of those standing against, opposing and persecuting you, then declare and depend on God’s Grace over yourself, your family, ministry, vocation, work, project or business.

His Grace is sufficient for you.