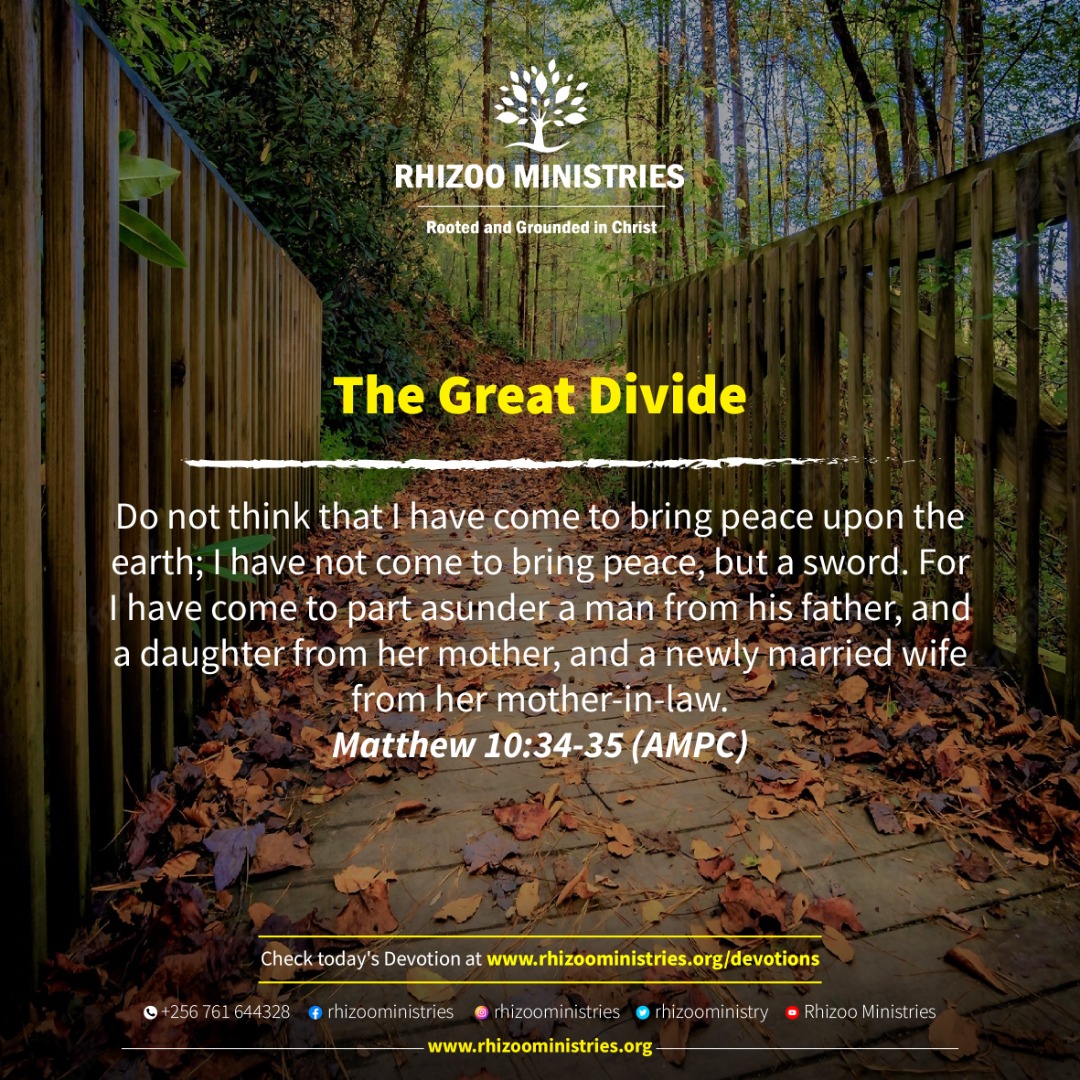 Jesus is the Prince of peace and He came to bring peace. When He was born the angels sang “peace on earth and goodwill towards men”. The kingdom He brought and proclaimed on earth is described as righteousness, peace and joy in the Holy Ghost. Romans 14:17. He is our peace, Ephesians 2:14, and He has come and preached peace to us. Ephesians 2:17.

The life, the kingdom, the vision that Jesus has brought into our world is the total exact opposite of what we on earth were brought up and believed in. Therefore, to embrace Christ means turning our back to everything that we previously knew and identified with.

Many of us were convinced to forsake our former lifestyle and take on and live the new Christ life. Others who include family, relatives, friends have not yet been persuaded to let go of the things they’ve grown up in, which were handed down to them through culture, experience, religion, and tradition.

Because of this there’s now the great divide. Those who have identified with Christ no longer have anything in common with those who have rejected Him.

Actually, the ones who don’t want anything to do with this new life in Christ Jesus mock, despise and detest the ones who have believed in and follow Christ.

This is the scenario that Jesus was describing when he said that He did not come to bring peace but sword. The sword cuts and divides. The life that Jesus brought cuts us off and divides or separates us from the death we were held in.

This is what He means that when we believe we pass from death to life. John 5:24.

There can’t be peace or accord or agreement between a person who has embraced Jesus and is therefore in the light and the other one who rejects Jesus and hence remains in darkness. 2Corinthians 6:14-18

To believe and receive Christ is to live and walk in the light while to refuse and reject Him is to remain and grope in the darkness. Regardless of how close, intimate, strong, or deep any relationship may be if one of the parties embraces Christ and the other declines there the great divide has already happened. Because the one is now in the light and the other has chosen to remain in the darkness. The two though connected by blood or ethnicity are now as far apart as east is from west. This is what Jesus meant when He said He came to part asunder a man from his father, and a daughter from her mother, and a newly married wife from her mother-in-law. But thank God that as we who have embraced Christ live and proclaim this life and light the others on the other side get to see the truth and so also cross over.