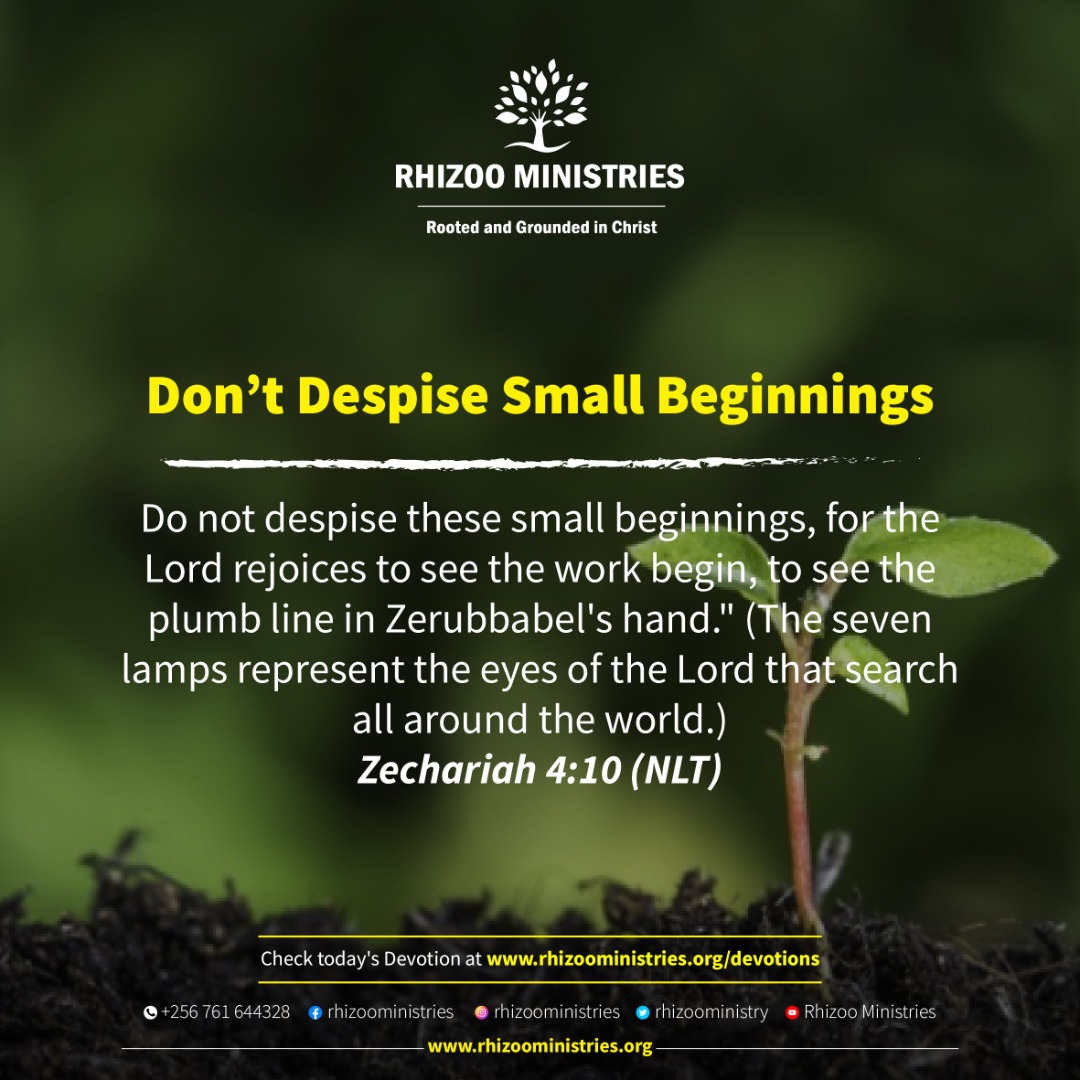 Do not despise these small beginnings, for the Lord rejoices to see the work begin, to see the plumb line in Zerubbabel’s hand.” (The seven lamps represent the eyes of the Lord that search all around the world.) Zechariah 4:10 (NLT)

Life is built on the principle of seed time and harvest. You begin with a seed which you sow, then after a certain time you get the harvest.

The farmer doesn’t despise and isn’t discouraged by the small beginning of the seed. He sows with confidence expecting a huge harvest.

We should likewise not despise or be discouraged by small beginnings because they potentially carry and when well-tended bring forth great endings.

We begin as little helpless babies and end up as grown up responsible adults.

Most of the businesses driving and influencing the world influencing began as simple ideas which at inception could easily have been thrown in the trash bin.

Everything God does He begins with a Word which seems very simplistic. John 1:1-3 (AMPC) In the beginning [before all time] was the Word (Christ), and the Word was with God, and the Word was God Himself. He was present originally with God. All things were made and came into existence through Him; and without Him was not even one thing made that has come into being.

It looks like mere talk at first but from mighty angels, human beings, animals, galaxies, oceans, to complex microscopic organisms, God only spoke a simple Word and they all came into being.

Whatever you want to be and do start right now. You have what it takes. Start with the little you have. Wherever you want to go and be start right now. You have the means to get there. The journey to the stars starts with one step. Even with those stars up there in the sky, we are told by astronomers that the light or shining we observe coming from them started out from them many light years or a very long time ago. In other words when we watch a shining star we do not see the light it is currently emitting right now but rather the light or shining that left that star so many thousands of years ago!

Lesson from the stars – it takes time for your shine to be seen but it will surely be seen.

The trek to greatness is usually traced from a humble beginning.

Don’t despise a simple idea, it could turn into an ideology that could shape and drive a company, a nation, or a generation. The few seconds you may start out with consistently focusing on and building your dream or vision may seem insignificant but they’ll turn into minutes, hours, days, months and years of unfolding growth and establishment of whatever your dream or vision is. The few people who may even seem insignificant with whom you’re in relationship and mutual up building will eventually by influence, growth, or increase, become a community with a global impact. Start small finish big.