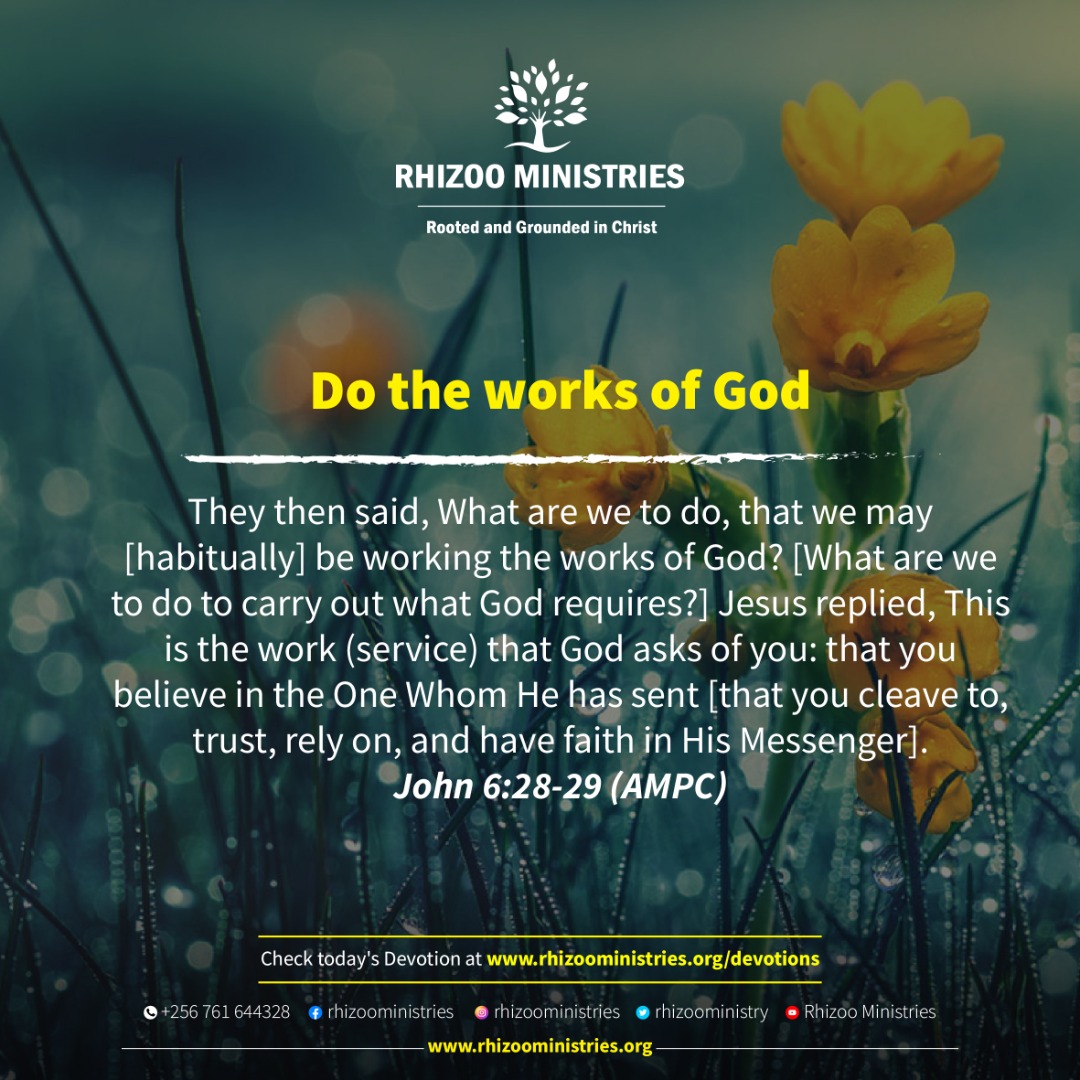 Do the works of God

They then said, What are we to do, that we may [habitually] be working the works of God? [What are we to do to carry out what God requires?] Jesus replied, This is the work (service) that God asks of you: that you believe in the One Whom He has sent [that you cleave to, trust, rely on, and have faith in His Messenger]. John 6:28-29 (AMPC)

The first thirteen verses of this sixth chapter of the Gospel according to John record one of the mighty works or signs or miracles that Jesus did in his earthly ministry. This was the miracle of feeding five thousand men besides women and children with five loaves of bread and two fish plus they gathered twelve baskets full of fragments that remained. Later after this event Jesus was in another place and these people came looking for Him. John 6:24, 25. When they found Him, He told them they were not looking for Him because of the mighty work He did but because they ate the bread to their satisfaction. John 6:26. Then He went on ahead to tell them not to work for food that spoils but food that endures to eternal life, in response to which they ask him what they must do to work the works(plural) of God. John 6:27, 28.

Jesus answers them and the rest of us that the work (singular) of God is to believe on Him (Jesus) whom He sent. Those people like us today thought that what God requires of us is to do a lot of things.  Because they spoke of doing the “works” of God. However, Jesus the one who knows intimately and reveals clearly the Father let us know that doing the works of God is actually doing one thing, one work. To do what God requires you do one thing. It is simply believing on Jesus. From the beginning God has always desired and expected one thing, one action from man – faith! In this context of God’s relationship and partnership with man faith is simply positive response to what God says. It is man saying yes to what God says, it is man agreeing with God. Jesus is what God says to man. Everything that Jesus did is God’s work, his finished work. When we positively respond to Jesus, when we say yes to Jesus and what He has done, that’s believing on Him, that’s doing the works of God which is actually one work. The greatest work of God is us becoming children of God. How’s this greatest work arrived at, how’s it accomplished, What must we do to become children of God? Believing on Jesus! John 1:12(AMPC) But to as many as did receive and welcome Him, He gave the authority (power, privilege, right) to become the children of God, that is, to those who believe in (adhere to, trust in, and rely on) His name– What must we do to be saved – which is a work of God? Believe on the Lord Jesus Christ. Acts 16:30, 31.