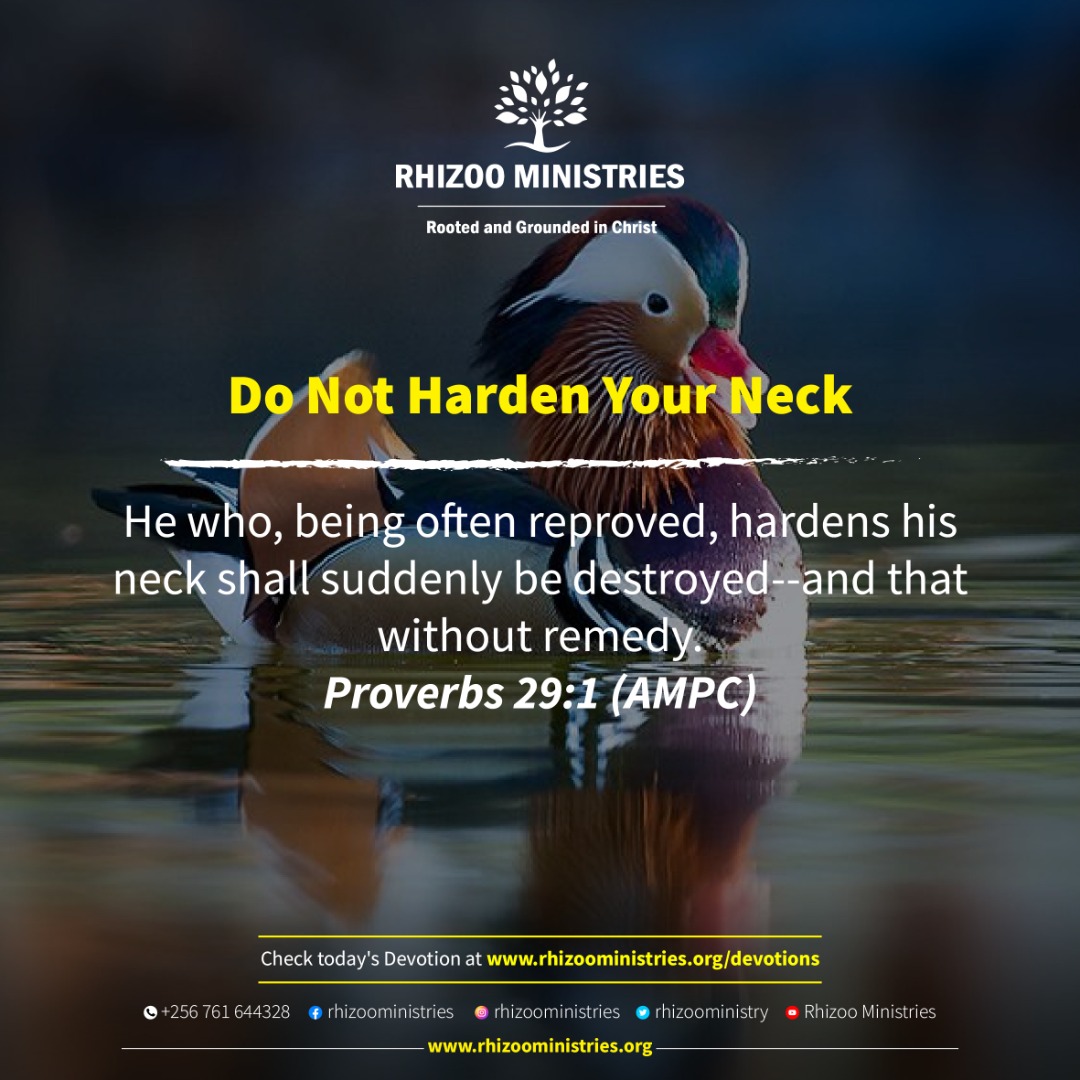 Do Not Harden Your Neck

He who, being often reproved, hardens his neck shall suddenly be destroyed–and that without remedy. Proverbs 29:1 (AMPC)

Hardening one’s neck or being stiff-necked is stubbornness. When a person hardens his neck or is stiff-necked he is unyielding, uncooperative unmanageable and unruly – he’s disobedient. Some people pride themselves for being stubborn. They think they know it all, that those who talk to them about God are looking for an angle to use to run their lives. So stubbornness gives them an upper hand or control. Several times in Scripture the Israelites were called a stiff necked people by God and the prophets. They refused to hear or believe in the Lord their God.

2 Kings 17:14 (NKJV) Nevertheless they would not hear, but stiffened their necks, like the necks of their fathers, who did not believe in the LORD their God.

They were disobedient and did not trust in the Lord.

They rejected His Word and Will referred to in Scripture as His statutes and covenant.

2 Kings 17:15 (NKJV) And they rejected His statutes and His covenant that He had made with their fathers. According to Scripture stubbornness or being stiff-necked is the same as idolatry or worshipping any other thing else except God.

1 Samuel 15:23. (NLT) Rebellion is as sinful as witchcraft, and stubbornness as bad as worshiping idols.

When a person rejects God and His Word they are rejecting life, help, wisdom, deliverance and favor. Proverbs says of such people that they self-injure themselves and love death. Proverbs 8:35-36 (AMPC) For whoever finds me [Wisdom] finds life and draws forth and obtains favor from the Lord. But he who misses me or sins against me wrongs and injures himself; all who hate me love and court death.

Just as a hardened neck or stubbornness is a result of refusing to hear and believe the Word of God, being flexible or yielded is a result of willingness to hear and believe the Word of God. Being stiff-necked is unbelief. Mark 16:14 (NLT) Still later he appeared to the eleven disciples as they were eating together. He rebuked them for their stubborn unbelief because they refused to believe those who had seen him after he had been raised from the dead. On the other hand a meek person is one who hears and believes God’s Word. He is the one who trusts in God. A person with a hardened neck is un-teachable. He’s a know it all. Stay teachable and flexible always willing to learn, adjust and change. This is what obedience is all about, this is what pleases God.

Is there something that the Lord has told you to do? Is it to start something, give something, reach out to someone, or leave a certain unfruitful relationship, habit or place? Choose to obey God.

Are you feeling a conviction in your Heart to give your life to Christ? Do you need a fresh start? Obey the voice of the Lord. Hebrews 3:15(AMPC) Then while it is [still] called Today, if you would hear His voice and when you hear it, do not harden your hearts as in the rebellion [in the desert, when the people provoked and irritated and embittered God against them].