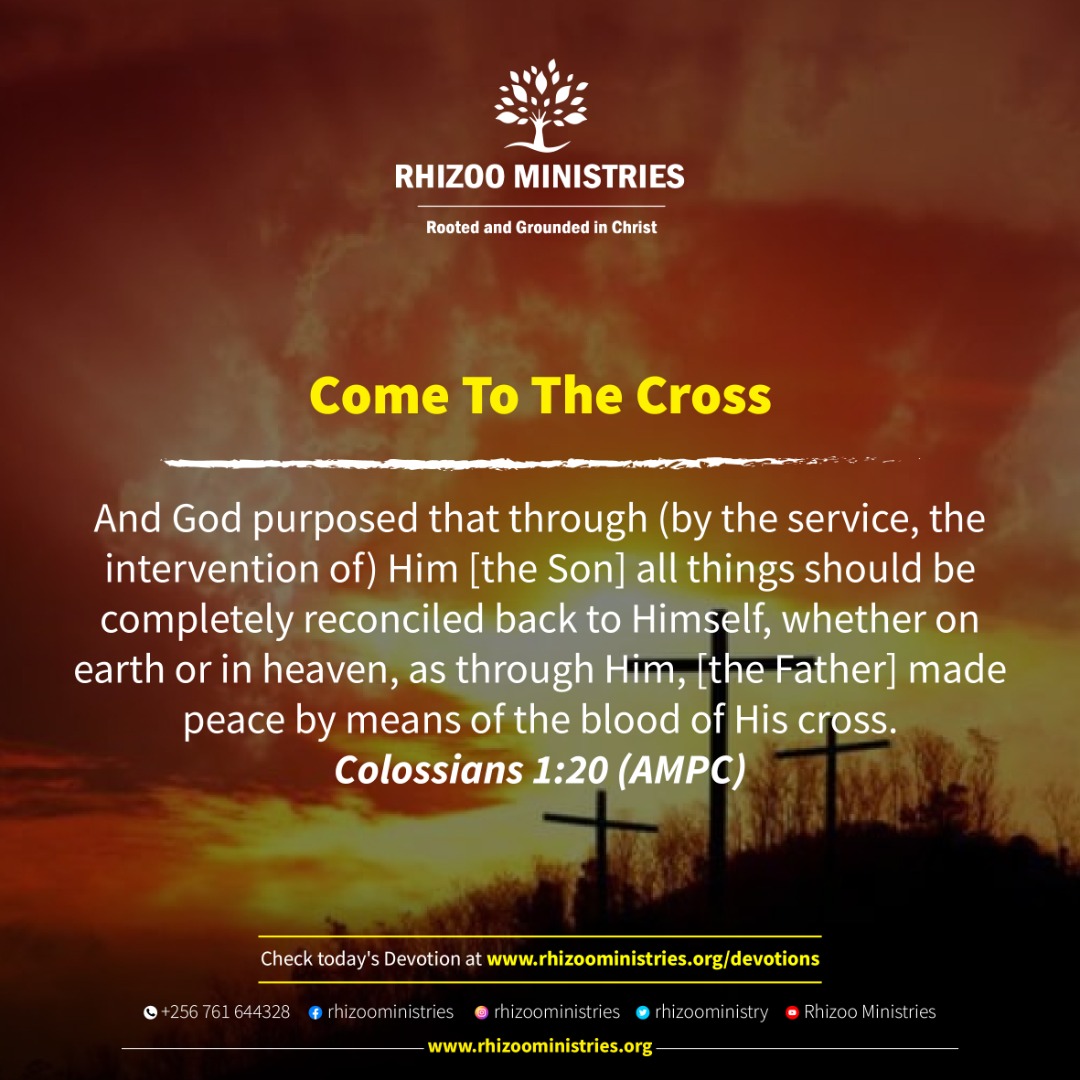 Come To The Cross

And God purposed that through (by the service, the intervention of) Him [the Son] all things should be completely reconciled back to Himself, whether on earth or in heaven, as through Him, [the Father] made peace by means of the blood of His cross. Colossians 1:20 (AMPC)

The Cross is a place where human DIY (do it yourself) effort is crucified and dies giving way to Divine ability and wisdom to takeover.

It’s also the place where the disorder, damage and devastation brought by sin is defeated, disarmed and destroyed.

To come to the Cross is to awaken and come to the realization that you’re not what you try in your own strength or wisdom to do or not do and that there’s nothing you can do to become who you ought to be. Who you truly ought to be is already decided and settled in Christ and what He did in dying on the Cross for your sin and rising for your righteousness.

The Cross is the final nail in the coffin containing every description and definition of you that’s not revealed from God. At the Cross bragging about your natural descent, cultural, religious, social, economic, and intellectual strengths and advantages is silenced and trashed. Philippians 3:7-8 (AMPC) But whatever former things I had that might have been gains to me, I have come to consider as [one combined] loss for Christ’s sake. Yes, furthermore, I count everything as loss compared to the possession of the priceless privilege (the overwhelming preciousness, the surpassing worth, and supreme advantage) of knowing Christ Jesus my Lord and of progressively becoming more deeply and intimately acquainted with Him [of perceiving and recognizing and understanding Him more fully and clearly]. For His sake I have lost everything and consider it all to be mere rubbish (refuse, dregs), in order that I may win (gain) Christ (the Anointed One),

To come to the Cross is to come to yourself like the prodigal son came to himself in the pigpen realizing that where he was and the things he was doing because of what he thought of himself were not the truth of his life. He belonged in his father’s home so he got up and went back home.

Luke 15:17-20 (AMPC) Then when he came to himself, he said, How many hired servants of my father have enough food, and [even food] to spare, but I am perishing (dying) here of hunger! I will get up and go to my father, and I will say to him, Father, I have sinned against heaven and in your sight. I am no longer worthy to be called your son; [just] make me like one of your hired servants. So he got up and came to his [own] father. But while he was still a long way off, his father saw him and was moved with pity and tenderness [for him]; and he ran and embraced him and kissed him [fervently].

Coming to the Cross is a home coming. It is realizing that we do not belong to sin, guilt, condemnation, bondage and suffering but rather we belong to our heavenly Father in His home, in His bosom, in His Love, Light and Life.

Coming to the Cross is finally finding out for yourself and thus enjoying the benefits of what God knows to be true concerning what He already accomplished in the Word becoming flesh, crucified and dying on the Cross, rising from the dead and seating at God’s right hand far above all things. What does God know to be true? Here it is in Scripture: Colossians 1:18-20 (MSG) He was supreme in the beginning and—leading the resurrection parade—he is supreme in the end. From beginning to end he’s there, towering far above everything, everyone. So spacious is he, so expansive, that everything of God finds its proper place in him without crowding. Not only that, but all the broken and dislocated pieces of the universe—people and things, animals and atoms—get properly fixed and fit together in vibrant harmonies, all because of his death, his blood that poured down from the cross.