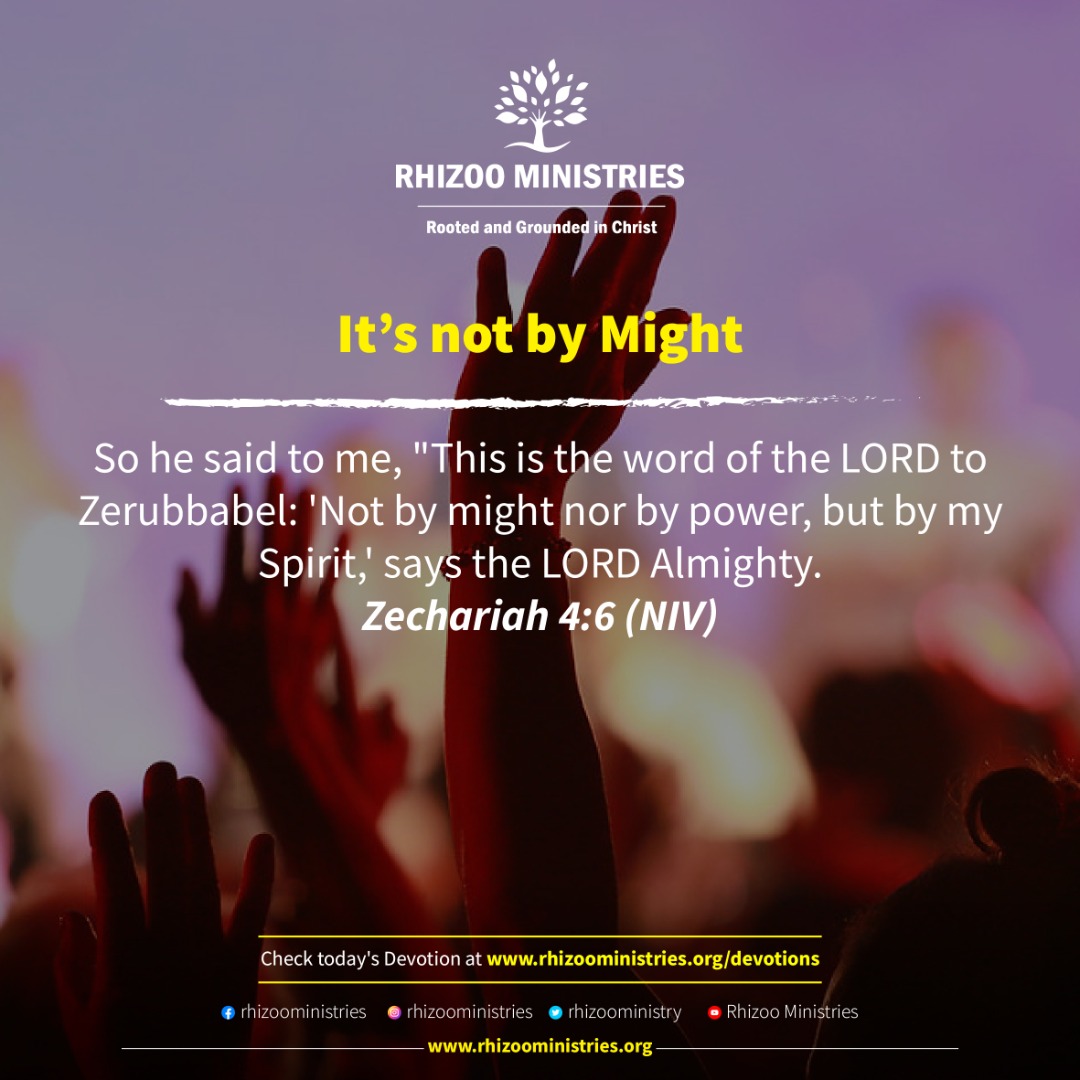 So he said to me, “This is the word of the LORD to Zerubbabel: ‘Not by might nor by power, but by my Spirit,’ says the LORD Almighty. Zechariah 4:6 (NIV)

Whatever God has called and commissioned us to do can only be accomplished with the resources that He Himself has provided. The God kind of work or project takes the God kind of provisions to be done. Zerubbabel and his team were rebuilding the temple of God at Jerusalem. It was during tough, troubled times with opposing enemies all around doing everything to stop the work. The team could not go on amidst all this onslaught. But God gave them this Word through the prophet Zechariah. That it’s not by might nor by power but by God’s Spirit. What he meant was that the work wasn’t going to be done by human might or power but by the Spirit of God.

Right from the Old Testament whenever God would call, set apart and commission someone to do some work, He would put His Spirit on them. Those called to be prophets, priests, or kings would have the Spirit of God come upon them. It is the Spirit of God that empowers us to do what God calls us to do. For example, when the prophet Samuel anointed or poured the anointing oil on David setting him apart as king, the Spirit of God came on David and from then on he began doing things he could not do before. 1 Samuel 16:13

Later we see David who was a youth killing Goliath a giant warrior, a man of war from his youth with a stone in a sling.

Even our Lord Jesus Christ before beginning His earthly ministry first had the Holy Spirit come upon Him in the river Jordan after being baptized by John the Baptist.

Everything Jesus did in His ministry – the preaching, teaching, healing, miracles, signs and wonders was under the power of the Holy Spirit-Acts 10:38 “how God anointed Jesus of Nazareth with the Holy Spirit and with power, who went about doing good and healing all who were oppressed by the devil, for God was with Him”.

After Jesus rose from the dead and was now going back to heaven, He told the disciples and consequently all of us that we shall receive power after the Holy Spirit comes upon us, enabling us to be His witnesses. Acts 1:8

There’s power, ability, enablement available to us for service or ministry because the Holy Spirit has come into our life. We can live and walk in power – heal the sick, set the captives free, grant sight to the blind, bring those in darkness into the light, not by natural human might or power but by the power of the Spirit of the Lord in and upon us.