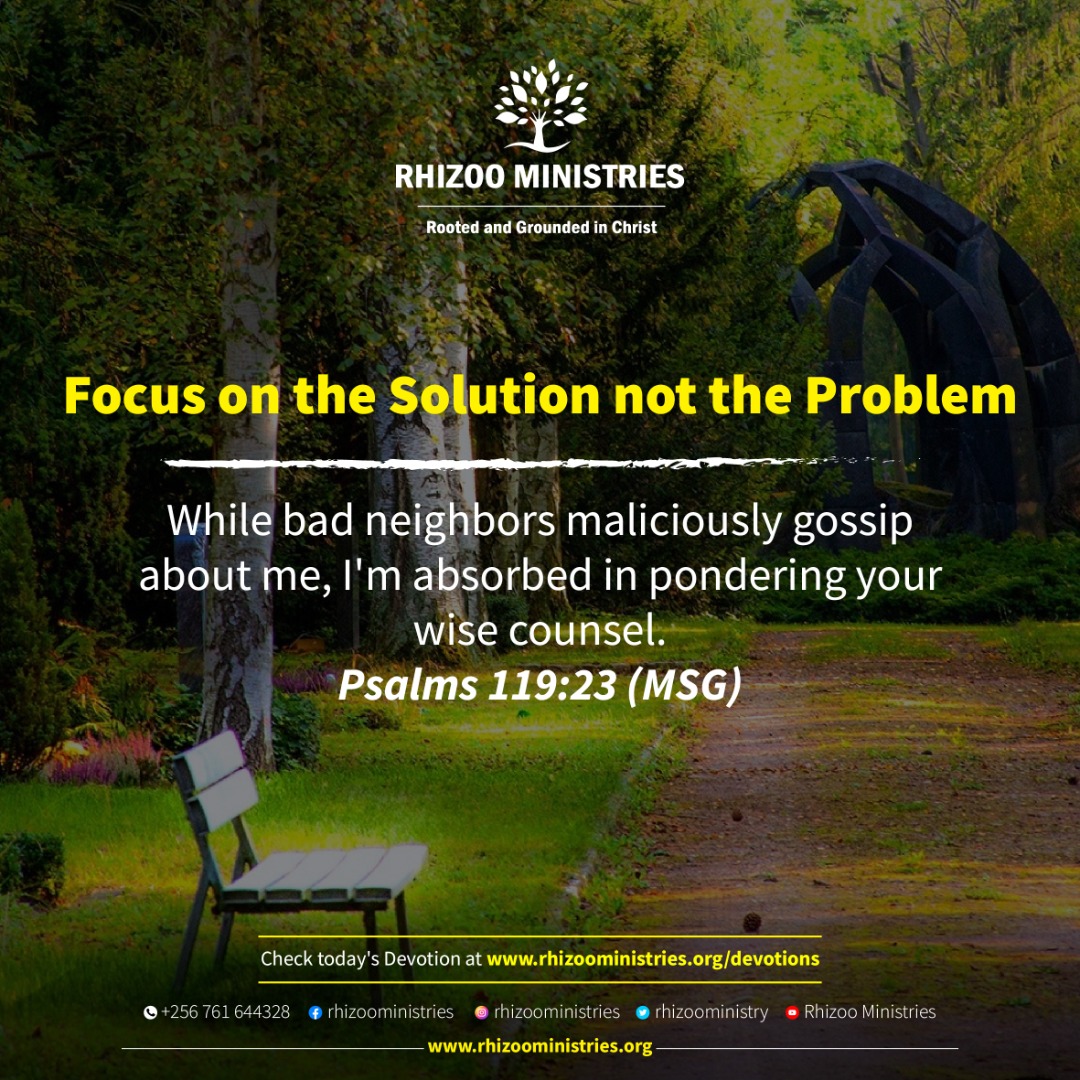 Focus on the Solution not the Problem

While bad neighbors maliciously gossip about me, I’m absorbed in pondering your wise counsel. Psalms 119:23 (MSG)

There’s always a working solution for every problem but there’s no solution that will ever work for the person who won’t get his focus off a problem.

We shouldn’t live in denial of the fact that problems happen or exist but we shouldn’t be preoccupied by them. We should focus on the solution.

The Psalmist recognizes the problem of bad neighbors maliciously gossiping about him but then quickly acknowledges the solution which is pondering God’s wise counsel.

God delivered the Israelites from bondage in Egypt to take them into Canaan the Promised Land that flows with milk and honey. But they never made it there. They all except Joshua and Caleb perished in the wilderness, only their children and those two men entered the Promised Land.

The reason Israel who left Egypt failed to inherit what God promised and gave them was because they fastened their attention on the problem. They refused to focus on the solution that was right in their midst. God, His presence, promise, power, provision, and protection was right there with them, in their midst but they never acknowledged Him.

Even after the mighty works the Lord performed for and among them they never got to that place of learning to trust Him for their welfare. They were always complaining and murmuring at the slightest inconvenience.

The entire chapter 13 of the book of Numbers tells of a people that focused on the problem instead of the solution. Standing at the border of the Promised Land they sent out spies to see what the land is like. When the spies came back they brought an evil report of the land. They talked about how they couldn’t take the land because the people who lived there were giants, stronger than them, they saw themselves as grasshoppers before them! They were so focused on the problem that they magnified it and multiplied it several times. They had forgotten the Almighty God who had freed them from Pharaoh and his army, the God who split the Red sea and they walked on dry ground, the Lord who spread a table in the desert for them where for many years they daily ate to their satisfaction.

On the other hand in the account of feeding the multitudes with a few bread and fish Jesus focused on the solution. He took the little bread and fish looked up (focused on) to heaven (to Father in heaven) and gave thanks and the bread and fish multiplied feeding the hungry that ate to their satisfaction and there was much more left over. (Matthew 14:15-21). Whatever you focus on you magnify and you multiply!

Focus on God, focus on His Word. Focus on His love for you; focus on His faithfulness and goodness to you. He is with you, in you, and for you.