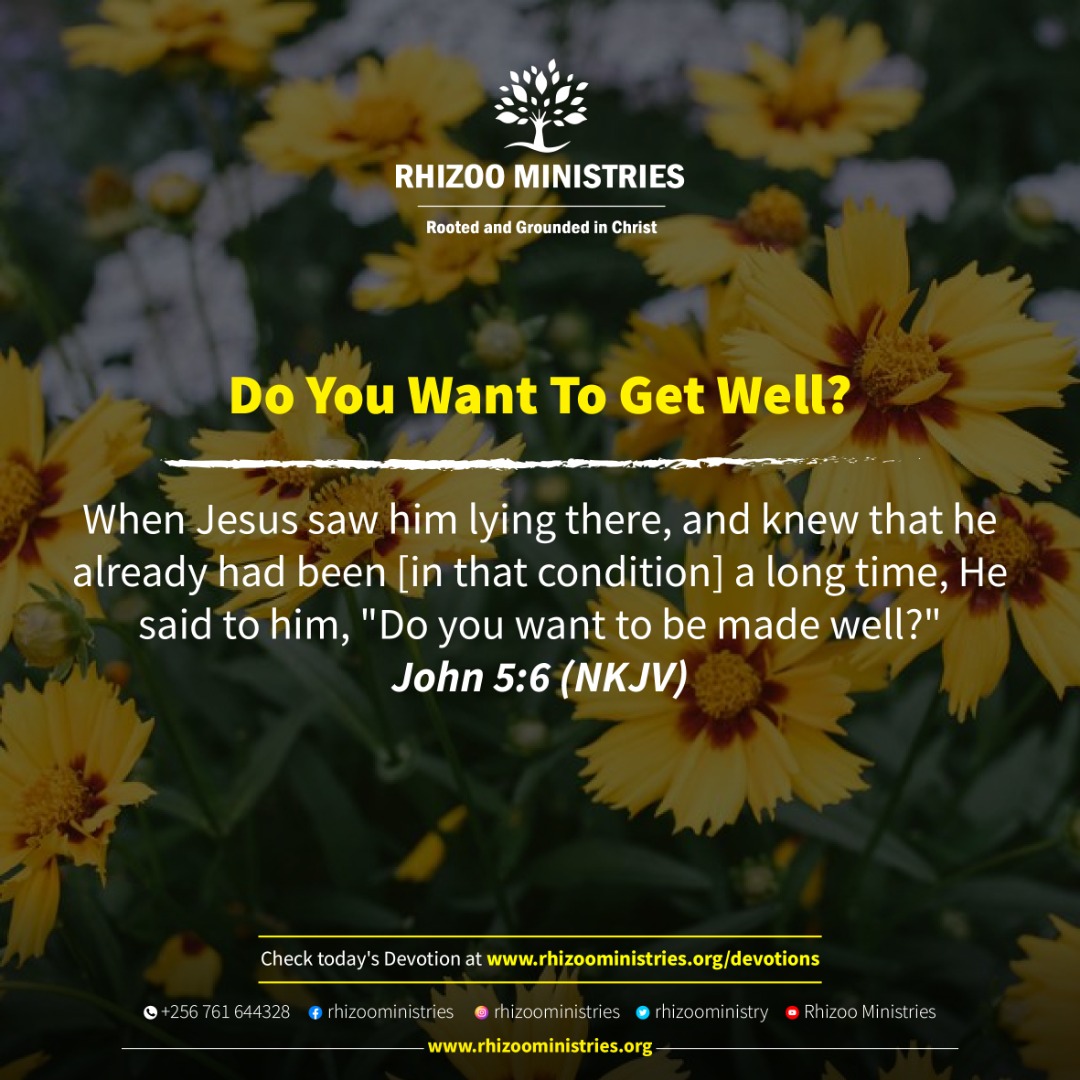 Do You Want To Get Well?

When Jesus saw him lying there, and knew that he already had been [in that condition] a long time, He said to him, “Do you want to be made well?” John 5:6 (NKJV)

Here is the story of a man that Jesus found at a pool, who had suffered with a deep-seated and lingering disorder for thirty-eight years.

There were so many people there with various sicknesses waiting for the movement of the water. For at a certain time an Angel would get down in the pool and stir the water and whoever got in there first after the stirring of the water would be healed of whatever disease he was afflicted with. John 5:1-5 (AMPC)

When a person stays a long time in some condition he gets used to it even when it’s oppressive. If he tries a number of times to get out of it and fails then he gets convinced that that is his lot in life. The man at the pool was surrounded by people in the same crisis like him for there were many other sick people there.

When a person is surrounded and continues for a long in the company of others suffering similar problems he settles down and gets used to it.

This is one reason why the elderly should stay in the normal traditional home which is a charged hive of aggressive life and energy where there are babies, toddlers, children, teenagers and adults as well as the grands instead of being put in homes for the elderly where they are surrounded by a retired, expired, ready to be disposed of environment.

This man at the pool had in his mind become one with his condition.

You always hear people say “my diabetes”, “my ulcers”, “my asthma”. It’s not yours it belongs to the evil one.

Never refer to the devil’s works as yours. No matter how long you’ve been afflicted never own the enemy’s works in your confession.

When Jesus asked the man if he wanted to get well, he rushed into excuse and helplessness mode, how he was unable and had no one to help him get into the pool. John 5:7.

No matter how difficult a situation may be never see yourself as unable or disabled, helpless or without help. The Lord is our ever present Helper. Psalms 46:1(AMPC) God is our Refuge and Strength [mighty and impenetrable to temptation], a very present and well-proved help in trouble.

The man saw no other way out. To him the only way there was for his healing did not favor him.

Never ever accept the lie that there’s only one way out of what’s troubling you and because that one way is blocked now you’re stuck.

He told Jesus that someone else would get down in the water first and get healed. Now he started blaming another person for the dilemma he was in.

Avoid the blame game. Do not blame yourself, your genes, your gender, the weather, the government, others, or God. Don’t even blame the devil. Even if you or another person had a hand in that setback you’re facing, blaming and keeping on blaming will blind you to the solution right before you and keep you stuck where you are.

Jesus right there in front of that man was the solution, the answer, the healing, the way out into liberty.

It is interesting to note that the Lord never felt sorry for that man. In many other cases in Scripture Jesus would meet sick people and feel compassion for them.

But for this man you kind of sense that Jesus was actually rough hard and tough. On the surface Jesus almost sounded harsh and sarcastic. How do you ask someone you well know he’s been sick for a long time that “do you want to be healed?” The Lord chose to rain on the man’s pity party.

Many times we want to be felt sorry for but the bittersweet truth is that what we need is to be violently roughed up out of the mire we got stuck in. You have to want a change in your life before God can move. Are you confortable in your misery or you seriously want a change? Today choose to believe the God’s word.