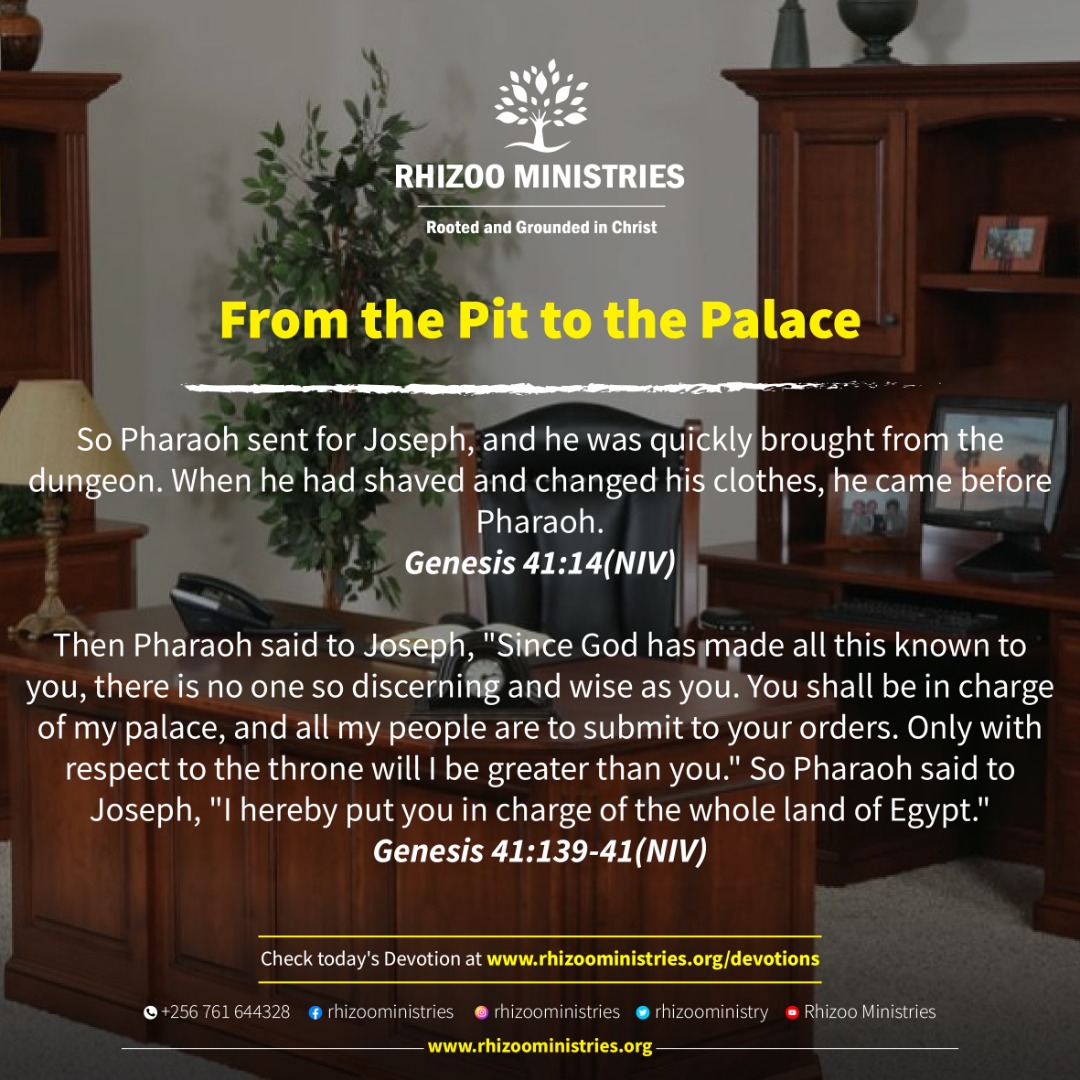 From the Pit to the Palace

So Pharaoh sent for Joseph, and he was quickly brought from the dungeon. When he had shaved and changed his clothes, he came before Pharaoh. Genesis 41:14(NIV)

Then Pharaoh said to Joseph, “Since God has made all this known to you, there is no one so discerning and wise as you. You shall be in charge of my palace, and all my people are to submit to your orders. Only with respect to the throne will I be greater than you.” So Pharaoh said to Joseph, “I hereby put you in charge of the whole land of Egypt.” Genesis 41:139-41(NIV)

It doesn’t matter where you are, God is well able to get you out of there to where He planned for you to be. Promotion and lifting up do not come from the east or west but from God. He puts down one and lifts up another- see Psalms 75:6-7

He never purposed for anyone to go and live in the pit of shame, slavery and destruction.

Job 33:28-30 (NIV) God has delivered me from going down to the pit, and I shall live to enjoy the light of life.’ “God does all these things to a person— twice, even three times— to turn them back from the pit, that the light of life may shine on them.

He purposed and planned for us to reign in life as kings. Therefore, God is always in the business of lifting up people from the dungeon or prison to the palace.

Joseph is an example in scripture about divine uplifting and promotion from the pit to the palace. He was sold into slavery by his brothers. Then he was thrown into prison after false accusation. But because God was with Joseph He ended up in Pharaoh’s palace. The wisdom of God operating in him brought him into the liberty and reigning as a king in life. Thank God we belong to a far greater lifting and promotion from the lowest pit to the most high throne and greatest palace of the universe.

Because of His great and wonderful love for us, while we were still in the lowest of pits – which is the pit of death, we were dead in our sins, God made and lifted us alive in Christ and seated us with Christ at His right hand in His throne, in His heavenly palace. Ephesians 2:4-6.  We are lifted and promoted far above all power, might and dominion.

We are God’s lifted and promoted ones.