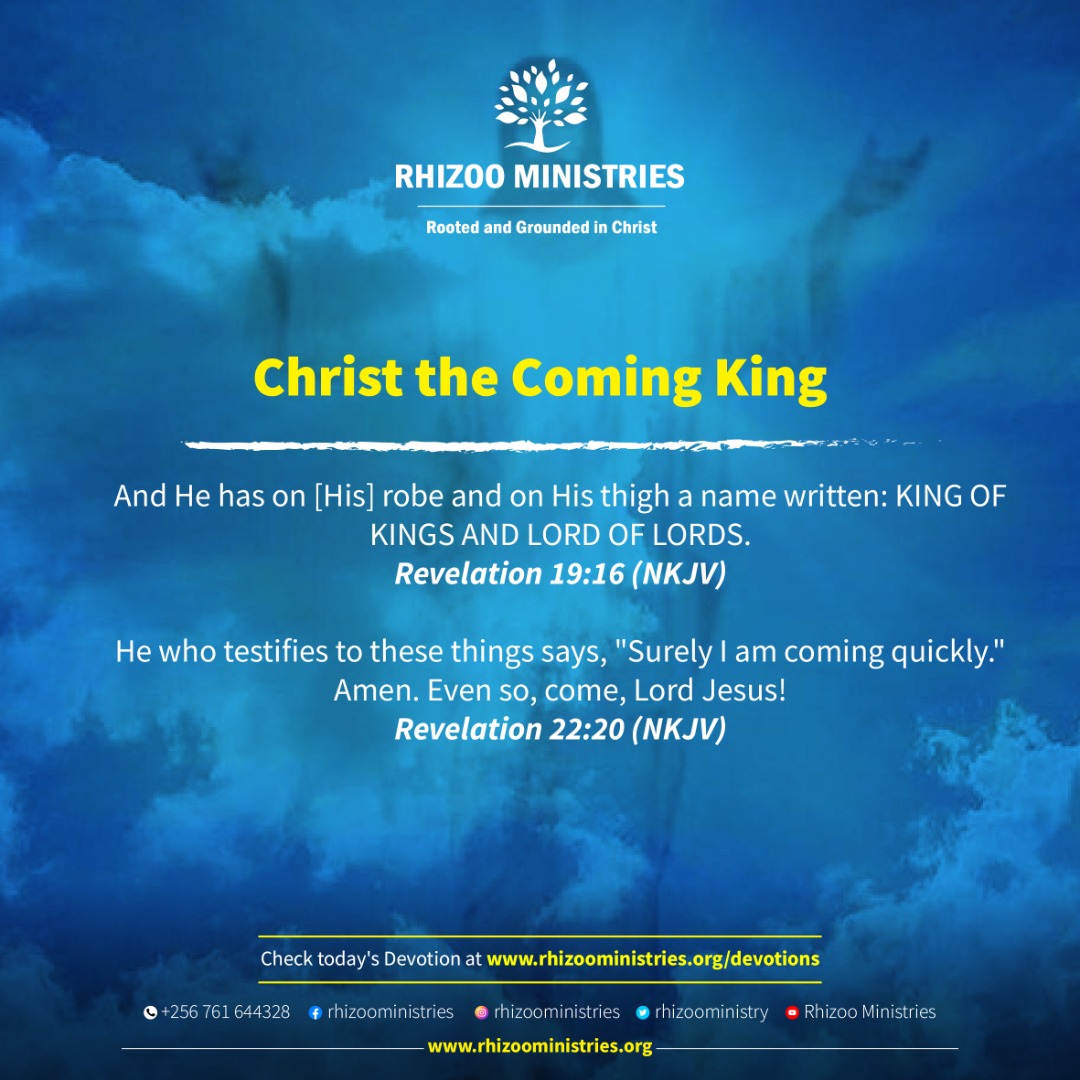 And He has on [His] robe and on His thigh a name written: KING OF KINGS AND LORD OF LORDS. Revelation 19:16 (NKJV)

He who testifies to these things says, “Surely I am coming quickly.” Amen. Even so, come, Lord Jesus! Revelation 22:20 (NKJV)

When He first came to earth Jesus the King was born as a helpless little baby. The wicked king Herod even wanted to kill Him and this King of kings, this Mighty God in a little, weak vulnerable physical body of an infant was secretly slipped away to safety to Egypt. The Word who is God the King over all the earth became flesh and lived, walked and served among us as a lowly unrecognized servant. The Great King Himself said He did not come to be served but to serve.

In Matthew 21:1-11 is the account of Jesus entering Jerusalem sitting on a young donkey. The Church celebrates this as Palm Sunday the one that precedes Easter Sunday.

Verse five of this passage says; Say to the Daughter of Zion [inhabitants of Jerusalem], Behold, your King is coming to you, lowly and riding on a donkey, and on a colt, the foal of a donkey [a beast of burden].

Jesus the King of Kings entered His city (Jerusalem is the city of the Great King Matthew 5:35) as a servant. Servants ride on donkeys, kings ride on horses even more so when they are entering their cities. Jesus rode on a donkey, a beast of burden, signifying that He came as a burden bearer the first time. The first time King Jesus came was to bear away our burdens of sin, guilt, condemnation, death, curse sickness, poverty. After satisfactorily accomplishing that task, He went to heaven.

But the Great King to whom all the kingdoms of the world belong is coming back!

This time He’s not coming to bear or deal with any burden including sin itself. No, He’s coming back to: Hebrews 9:28(AMPC) Even so it is that Christ, having been offered to take upon Himself and bear as a burden the sins of many once and once for all, will appear a second time, not to carry any burden of sin nor to deal with sin, but to bring to full salvation those who are [eagerly, constantly, and patiently] waiting for and expecting Him.

We are thankful for all the good life we have and enjoy in the here and now but we are looking forward to and shouldn’t for anything in the world lose focus of something or someone even greater – the soon coming King!

Philippians 3:20-21(NKJV) But our citizenship is in heaven. And we eagerly await a Savior from there, the Lord Jesus Christ, who, by the power that enables him to bring everything under his control, will transform our lowly bodies so that they will be like his glorious body.

We have a Savior King who’s coming back to establish His everlasting Kingdom on earth!